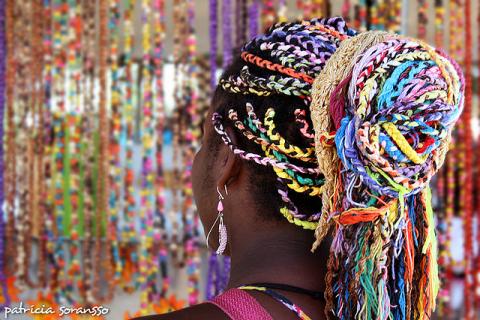 As a Maryknoll missioner it is my pleasure to be able to reflect on the readings today which is Women’s International Day. I have been working with many different groups of women in the periphery of the northeastern city of Brazil for a little over 20 years. It brings me joy to share this reflection and the changes and transformations I have seen among these women which I believe depicts Jesus’ actions found in the gospel today in the story of the cleansing of the Temple.

Many of us have heard women’s stories of pain, suffering and resurrection from all over the world. Thanks to International Women's Day that is celebrated in many countries around the world. According to the United Nations, “It is a day when women are recognized for their achievements without regard to divisions, whether national, ethnic, linguistic, cultural, economic or political. It is an occasion for looking back on past struggles and accomplishments, and more importantly, for looking ahead to the untapped potential and opportunities that await future generations of women.”

When I was growing up in Tanzania, our Catholic religion teacher gave us an example of the punishment that God can give us if we do not practice the 10 commandments. He invited us to observe carefully the full moon at night where he pointed out an image of a woman carrying a baby on her back and a load of firewood on her head. He explained to us that this woman on the moon was there as a symbol of women who are punished by God due to unwillingness to follow God’s third commandment, “Keep Holy the Sabbath day” (Exodus 20: 8-1). My child’s understanding of that teaching was that women really were meant to suffer. They had so much to do which they could not accomplish in six days and therefore for the survival of their family they had to continue even on the seventh day and yet they were punished for that. It left me wondering, “What kind of God was this?”

When I arrived in the United States at the Maryknoll Sisters’ Center I was relieved to learn that the image we see on the moon is a rabbit and as I looked carefully, I actually saw a rabbit instead of a women being punished by God. It showed me that as our reality changes we also have a different meaning of God’s commandments.

I was assigned to Brazil as a missioner and my first work was with black women. These women were so ashamed of their bodies and their souls because of what the society believed; that black women were slaves, good for prostitution, and ugly looking. Maria Aparecida, a black woman who I first met when I arrived in Brazil, had a boyfriend for five years. The two of them loved each other mutually with joy and hope for their future life as a couple. When they decided to get married, her boyfriend Francisco shared their decision with his mother. The light skinned mother reacted strongly, saying that he could not marry Maria Aparecida because she was black and would pollute the family blood. She told her son that black women are good for sex but not for marriage.

Due to cultural family ties and relationship, Francisco listened to his mother’s advice, and looked for a lighter skin girl to marry. Maria Aparecida suffered quietly this painful loss of a boyfriend just because of the color of her skin. She eventually got married to another man but it took her at least five years to recover her self-esteem and from the pain of this loss.

As an African woman I had the honor to be invited to an Afro-Brazilian sacred ritual of honoring their ancestors through dancing and singing. However, I noticed that the ritual was done secretly and as a confidential matter. The priestess who led the ritual told me that they were constantly persecuted by the police accused of venerating other gods other than the God of Israel. (Exodus 20: 3-6). Interestingly, listening to the deeper meaning of their rituals, the priestess told me that she also believe in one God, however, the means to reach this one God is through ancestors which could also be understood as a communion of saints.

In the gospel of John, Jesus showed us that a transformation is needed. When Jesus turned over the tables he was not only showing that corruption and worldly business cannot be done in God’s temple, but it is a place for the sacred. (John 2: 19-21) Jesus also reminded them that God’s temple is his body and therefore our body is the temple of God.

The gospel reading today on the third Sunday of Lent, which also happens to be Women’s International Day, is a hopeful reflection for many women all over the world. Jesus talks about his body being a temple of God and by his death and resurrection. We humans, independent of race, class, gender, old, young, Gentiles or Jews, understand our bodies are temples of God and therefore sacred.

With the efforts through the United Nations’ declaration of Women’s International Day, many individuals and organizations have worked hard to bring awareness to men and women all over the world on the value of the woman’s body, health, life, and role. In my work of raising awareness here in Brazil, we managed to help women like Maria Aparecida understand and recognize that their bodies – just like Jesus’ body – are sacred temples of God.