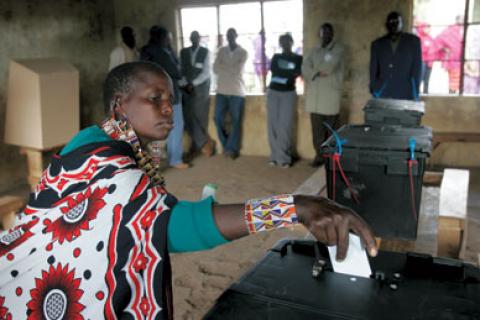 In Kenya we are in the middle of the 2013 Lenten campaign to prepare for the general elections tomorrow, Monday, March 4. After the terrible post-election violence in 2008, can Kenya elect a new president and government in peaceful, just and fair elections? We realize the whole world is watching.

Photo of Maasai woman voting in 2008 election from the Nation

The overall theme of the Lenten campaign is "United and peaceful Kenya: The change I want to see." The specific theme for this third Sunday of Lent is “county governance.” The 2010 Kenya Constitution provides for a devolved governance structure that sets up 47 counties that are guided by democratic principles, separation of powers and reliable sources of income to facilitate local development. The Lenten campaign booklet uses a see-judge-act methodology or process to reflect on these issues. Catholics in their local groups, such as the 45,000 Small Christian Communities (SCCs) in Kenya, are encouraged to reflect on such questions as: “How can we, as Small Christian Communities, contribute to good governance in the Church and our counties?” We are challenged to participate in civic education programs and to study and reflect on the qualities of good leaders.

In the first reading Moses experiences God in the desert especially in the burning bush. Today do we experience God in the “other” – the person from another ethnic group (tribe)? The person of another color or sex or race or religion? Are we open to meeting Jesus “in disguise,” in an economically poor person; in a person with less education or wealth than we have; and in various outsiders/marginated people in our society?

Research indicates that 75 percent of the members of Small Christian Communities in Nairobi Archdiocese are women. In interviews Catholic women have said: “In the hierarchical, clerical Catholic Church in Kenya we women feel at the bottom. This is reinforced by traditional African customs and traditions. But in the SCCs we feel that we women are equals and have a voice.”

In the Gospel Jesus uses the parable of the fig tree that helps us reflect on repentance, reform and renewal during this Lenten season. Are we cultivating our personal and communal “ground,” that is, our simple lifestyle, our good habits, our balanced attitudes, our reaching out to needy people? Or do we tend to be judgmental, promote stereotypes and give labels to other people? Are we using the good fertilizer of prayer, fasting and almsgiving during this Lenten season to change and deepen our lives? Then we will bear the good fruits of community, equality, justice, listening, peace, serenity and silence in our personal and communal lives.

The 2013 Kenyan Lenten campaign offers us a special opportunity to use many concrete pastoral resources during this 50th anniversary of the Second Vatican Council, this Year of Faith and in the spirit of the New Evangelization:

In this 2013 calendar year the African continent will have general elections in Kenya, Madagascar, Mali, Tunisia and Zimbabwe. The New York Times describes multiparty democracy in Africa as “messy and unpredictable.” But with the help of God and the determination and active endurance of the African people we shall succeed.

As a take away it is important for people living in the U.S. to realize how the November 2012 elections modeled a peaceful and fair election and influenced people in Africa and around the world. For example, here in Nairobi Kenyans marveled at how after the U.S. presidential debates the candidates and their families could shake hands, embrace and talk warmly with each other. A major challenge in Kenya and throughout Africa is that political candidates should sacrifice their pride, desires and ambitions and be good losers if they don’t win the election. An important Swahili (Eastern and Central Africa) proverb applies to elections in Africa: “The person who cannot accept defeat is not a competitor.” The test and maturity of democracy and ongoing good governance in Africa is for the losers to openly accept the results of the public vote (“the voice of the people”).