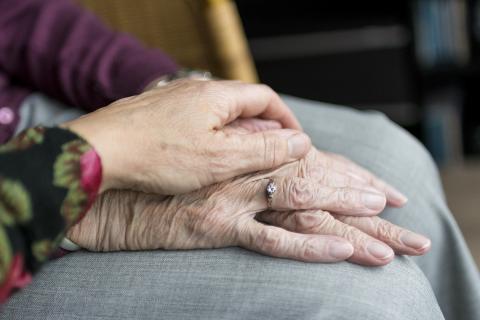 Fr. Sacha Bermundez-Goldman, SJ, who served in Tanzania and Cambodia with the Maryknoll Lay Missioners, reflects on God’s abundant love amid suffering.

I call my mother every day—every morning around 5:30 a.m, to be more precise—which is around 12 noon (of the previous day!) where she lives. We usually speak for about ten minutes. Actually, I speak and mum listens. My mother has suffered from a degenerative neurological disease for over a decade and in the last couple of years she has not been able to speak more than a couple of words at a time. Most of the time she is not able to say anything at all. We are still able to communicate with the assistance of her devoted caregivers, who have become extremely adept at lip reading and understanding what she is trying to say through her eye movements. Thanks to them, I can ‘listen’ to my mother, and for this I’m deeply grateful.

In previous years, when she could still speak and I was able to travel and visit her, she would invariably ask me three questions: "Does God love me?" and “If God does, why has God allowed this terrible illness to take over my body?” and “What have I done that is so terrible that God should punish me like this?” In the early years of her illness I tried offering various answers: the inevitability of pain and suffering in the world; my belief that God related to us in mercy and compassion rather than through punishment; pointing out God’s loving presence in her life which gave her the strength to endure the trials she was facing. Mum would listen to my words, but she never seemed totally convinced by them. I think she was hoping for more conclusive answers from her priest son! She was looking for something that would prove to her that God indeed loved her despite what she experienced as strong evidence to the contrary.

Love is the theme of today’s gospel. Love, and also healing, acceptance, and the confirmation of a mission. It is a long passage, so the Sunday Lectionary offers a shorter version, which I think is a pity because if that version is chosen, we miss out on the wonderfully powerful interaction between Jesus and Peter.

After a night of unsuccessful fishing together, Jesus appears to the disciples and advises them to recast their net over ‘the right side of the boat.’ It becomes so abundantly full that they are not able to pull it in, and that is when they recognize him. Back on the shore, Jesus invites them to share breakfast—a Eucharistic celebration—by a charcoal fire. The symbolism is important because Peter had denied Jesus three times during Jesus’ Passion as he warmed himself by a charcoal fire. Now Peter is asked to reaffirm his love for Jesus as he is asked the same question three times, “Simon, son of John, do you love me?” Distressed, Peter responds each time, “Yes, Lord, you know that I love you. Each time Jesus commands him to feed and tend his ‘sheep,’ thus confirming what would be Peter’s lifelong mission.

St Ignatius of Loyola wrote that ‘love ought to manifest itself more by deeds than by words.’ We could be judgmental of Peter and argue that, in denying Jesus, he’d failed this maxim thoroughly! But who among us has not failed in similar ways? Fear, feelings of inadequacy, traumatic experiences, resentment or even excessive self-concern can prevent us at times from manifesting the love we profess toward those closest to us, including God. And, as in the case of my mother, and many of us, they can also lead us to doubt God’s love for us.

My mother actually stopped asking me those three questions a couple of years before her voice was gone. Today, she seems much more at peace than in the early years of her illness. I would like to think that perhaps some of my answers might have contributed to this, but I doubt that is the case. Most likely it is the effect of God’s grace in her life. Perhaps the ‘wisest’ piece of advice I ever gave my mother in this regard was to ask God directly the questions she was asking me. She said she would, and I believe she did. For my part, I resolved a few years ago that I would try to reassure her of God’s love for her more through deeds than words. That is what I hope I am doing through my daily phone calls. To share God’s love with others is in fact what Jesus asked Peter to do. And that is what God asks each of us to do as well, through both our words and our actions, today and every day.