Solemnity of Christ the King 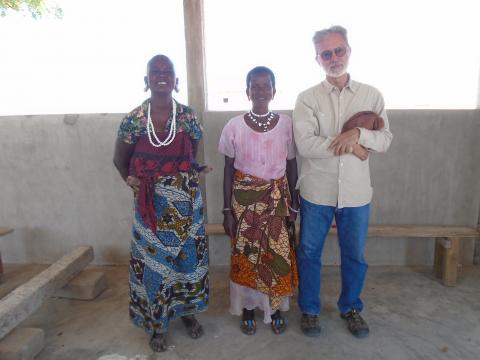 Fr. James Eble, MM, reflects on what it means to have Christ as our King who acts as a true shepherd of the people.

The first reading from the Prophet Ezekiel sets the tone for all the readings and the Liturgy of Christ the King, which we celebrate this Sunday. We hear God saying through the mouth of Ezekiel, “Behold, I, I myself will search out my sheep, and will seek them out.”

God does this because the leaders of Israel, the shepherds, have abandoned the people. Instead of guiding and protecting the “sheep,” the people, these false shepherds have grown fat from the sheep themselves. We hear of God’s complaint about these supposed shepherds in a few verses before today’s reading, “Ho, shepherds of Israel who have been feeding yourselves! Should not shepherds feed the sheep? You eat fat, you clothe yourselves with the wool, you slaughter the fatlings; but you do not feed the sheep.”

God now enters the history of the people and becomes their Shepherd in the person of Jesus. A new, alternative society comes into being where the Leader of the nation, instead of lording their power over the people and oppressing them, walks with the people in solidarity. God becomes a Servant Leader for the people, replacing the oppressive leader who had abandoned the people in their time of trial.

During my first two years of mission life in Tanzania I was fortunate to observe a way of life that is slowly dying out in Africa: the nomadic pastoral existence of the Wataturu. These people have a lifestyle and culture similar to the Masai, moving their cattle over large spaces of land depending on the season in search of water and pasture.

I used to go out to their land and pitch my tent to observe their life and learn their language. Many times I herded with the young boys during the day. One night before our evening meal of honey, corn meal, and smoked milk, one of the men said to me, “You see that cow over there? It has malaria.” I looked over to where he was pointing and could just barely see the shape of a cow in the growing darkness. I asked him how could he tell that cow had malaria. He said, “By the way the hair on its back was lying.”

These pastoral people had a whole culture centered around their cattle, goats and sheep; each cow had a name and was carefully cared for. All the Wataturu shepherds were very close to their cattle and were ready to fight to the death to protect them. They are a good example of how leaders in the Church and society ought to lead their people.

Pope Francis has said famously that the servants of the Church should have “the smell of the sheep.” After herding sheep and goats for a few days I always came back to the mission literally smelling like sheep! If you stay close enough to the sheep one really does start smelling like them.

As we celebrate Christ the King, I think it would be good to ask ourselves just what kind of a King we have in Christ. The Gospels are clear: we have a suffering king who walks in solidarity with his sheep, especially those on the margins. Jesus, the Good Shepherd and King, does not run away from the struggles of the people. He stays through it all, never abandoning the sheep.

During this time of COVID-19 it is vitally important that the followers of Christ not abandon their people, especially the most needy. As missioners of Christ the King, we stay with our people and, if need be, accept the consequences of staying, whether it be ‘smelling’ like the sheep or a greater sacrifice. Bishop James E. Walsh, MM wrote an article on why he decided to stay in China during the communist revolution in the face of possible internment or death, saying “If internment should intervene in the case of some, or even death, I think it should simply be regarded as a normal risk that is inherent in our state of life.”

We missioners at the House of Prayer in Mwanza, Tanzania are following in this tradition of staying with the sheep (people) regardless of what happens. We are part of a living tradition that puts us in close solidarity with the people. We are followers of the King who smells like the sheep.

Photo: Fr. James Eble with some members of the Wataturu people in Tanzania.