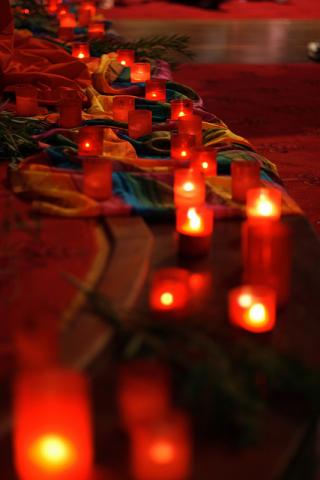 Dan Moriarty, a former lay Maryknoll missioner, lives and works in Bolivia; he wrote the following reflection which was published in A Maryknoll Liturgical Year: Reflections on the Readings for Year B, available from Orbis Books.

Like the Jews and Gentiles who formed the early Church in Ephesus, today we find ourselves in a world in which religion, nationality, ideology, and other designations too often divide the Body of Christ. Today’s first reading warns us not to follow those leaders who would divide and scatter God’s people. In the second reading, Paul reminds us of the reconciling Spirit of God, bringing former enemies together as one Church, one Body of Christ.

The Gospel story tells a different story of separation: Jesus and his disciples are overwhelmed by crowds that leave them no time to rest or even eat, so they remove themselves from the throng. They literally retreat, sailing off to a deserted place. But soon, when the crowd catches up to them, Christ is moved to compassion. The same sheep-and-shepherd imagery we hear in Jeremiah here describes Jesus’ recognition that these are God’s people, in need of a pastor. It is necessary sometimes to retreat from the agitation and demands of the world, in order to return to it with fresh eyes, and be moved to work for reconciliation.

Bolivia is a country with 36 different ethnic groups, many of which historically have had little interaction. During the 500 years since colonization, further divisions between rural peasants and city dwellers and different economic classes have been exploited by politicians, landowners, and others in a kind of centuries-long divide-and-conquer campaign. In recent years, as indigenous groups united in their struggle for social and political change, elite groups of Bolivians who stood to lose power and privilege as a result of such change worked to exacerbate ethnic, geographic, and economic divisions, sowing conflict intended to stymie the change process. At times, members of the indigenous-led government rose to the opposition’s baiting, and reacted in ways that further divided the people. “Bolivia on the brink of civil war” was a common headline as foreign analysts observed the country’s struggles.

It was in this atmosphere of division that the brothers of Taizé, the ecumenical monastic community, traveled from France to Bolivia to organize a massive youth retreat. Thousands of young people from all parts of the country gathered in Cochabamba for a week of living, eating, singing, and praying together. Quechua girls from rural villages in the Altiplano dressed in traditional skirts, sandals, and broad-brimmed hats participated alongside light-skinned, upper-middle-class boys from the lowland metropolitan city of Santa Cruz sporting Nike baseball caps and Abercrombie shirts. The diversity of the youth gathered for the retreat was strikingly representative of Bolivia’s overall population.

As part of the retreat, Maryknoll missioners offered a workshop to participants, posing the central question: “As Bolivia changes, what positive contribution do you have to offer?” The first workshop aimed to help young people discover that they do indeed have gifts to offer – that they can make a difference. Participants were asked to identify ways they have or would contribute to positive change. At first, many of those gathered felt far removed from the important work of changing a country. They focused on being good role models for younger siblings and helping their parents. But then, as we named some of the challenges facing the country, they began to look around the room. They saw faces from all different sides of the country’s much-reported divisions. Gradually they realized that what they were doing at that very moment – the Taizé retreat – was a powerful contribution to justice and peace in Bolivia.

“The media tells us we’re supposed to hate each other,” observed one teenager, “but I don’t hate any of the people here. We all want the same things. We all share the same faith.” The youth resolved to return home and tell their communities about the strangers they had befriended at the retreat, and to remember their experience whenever others tried to convince them to work against one another. Like Jesus and his disciples in the gospel reading, it was by separating themselves from the crowd and retreating to a place apart that these youth were moved to compassion for their people, and inspired to unite Christ’s flock in Bolivia.

As we look at our own communities, as we consider issues such as war, immigration, and economic exploitation, who are the false prophets who divide and scatter God’s people? Are we one body in Christ, or do we allow earthly interests to sever that body? Let us step back, away from the noise of the crowd, and ask ourselves: What does compassion demand of me? What am I doing to reconcile God’s people? How can I contribute to positive change?