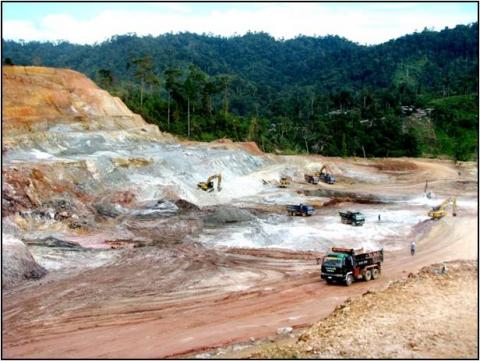 Growing up in northeastern Pennsylvania where “coal was king,” polluted air, rivers and creeks were just the way it was. This was during the years when underground mining was shifting above ground to strip mining. And now in the U.S. and other countries, the mining corporations have been given legal cover to mine by “mountain top removal.”

My first assignment as a Maryknoll sister was to the Mountain Province of Luzon, Philippines where mining companies were tearing apart mountains and forests for gold, copper, and timber. Over a period of more than 15 years, I saw beautiful forested mountainsides, home to local indigenous people, literally blown up to build silt ponds from copper mines that polluted the clear spring waters upon which people depended for drinking, cooking and washing themselves and their clothes.

Many years later I worked with an ecumenical organization that assisted local communities in Africa, Asia, Latin America and the Caribbean with social and economic development programs. Everywhere we went we saw many kinds of environmental destruction which caused local people to lose their means of livelihood, sources of clean water and firewood. We provided education and training to help people prevent further damage to their lands and to take steps to preserve place not yet damaged.

Today’s readings speak of the power of faith and the need for healing. God’s love and care for the poor is enduring. Acts 5: 12-16 speaks of how the “believers” gathered and that others did not join them. In fact all the Jewish people were believers in the God who spoke to them through the prophets. It was another thing to believe in Jesus whom they knew. It is also difficult for us to believe in the prophets among us who may be challenging our comfort zones as Christians and citizens. Yet it is the call to accept the Jesus we do not see that is the essence of Christian faith. It is how we live our faith that matters.

Psalm 118 reminds us that God’s love endures forever.  Do we really believe this and do we have the courage to take risks by challenging our church and our government when we together fail to live the Gospel by standing with the poor and despised in our world? Who do we stand with today as Earth is being destroyed and innocent people are killed and made refugees because of wars, man-made and natural disasters?

In Revelation John is writing from Patmos where he is in exile because of his faith in Jesus, who lived and died for us and still lives on in the Resurrection which we celebrated last Sunday. If we are “Resurrection people” how do we show that? The early Christians were known by “how they loved one another.” How in our church and our society do we show our love for those who are different from us – people of other faith traditions, other sexual orientations, immigrants and people made poor by government and economic policies that not only exclude them but even make their lives worse?

Today being a responsible Christian requires us to also be responsible citizens. That means not tolerating what passed for debates in the recent presidential campaigns and the ongoing debacle of the dysfunctional U.S. Congress which not only hurts poor people and working class people, but even demeans our country in the eyes of the world. The U.S. Catholic Bishops Conference and NETWORK, a national Catholic social justice lobby, both publish voter guidelines and educational materials that can be used to educate ourselves about how to make our democracy healthy again and make it work for those who are poorest among us. This is something we must work on all the time, not just every four years when we have presidential elections.

Climate destruction is one of, if not the most critical problem facing our country and our world. Despite the vocal and well-funded few climate deniers, there is no doubt that the fruits of the Industrial Revolution of the past 200 years or so has destroyed the balance of Earth’s biological and hydrological systems on which all peoples, plants and animals depend. Millions of people around the world already suffer from environmental degradation of one kind or another. As Christians we are called to care for Earth and all its creatures.

To be led by the Spirit in the 21st century is to be involved with what Thomas Berry calls the “Great Work.” That is, to carry out the transition from “a period of human devastation of Earth” to a period when humans will “be present to the planet in a mutually beneficial manner.” Columban Fr. Sean McDonagh, one of the prophets of ecological praxis, says, “Our unique human vocation is to celebrate the beauty and fruitfulness of life on Earth.” It is grounded in the Eucharist. But it issues forth in personal and political action. (Edwards, Denis, Ecology at the Heart of Faith: The Change of Heart That Leads to a New Way of Living on Earth, (2006.) Orbis Books: Maryknoll, NY, pp. 112 & 113.)

This is the challenge to us Resurrection people.  How will we respond?

Photo: Canatuan Copper Mine in the Philippines by Byoguru and licensed in the creative commons 3.0 via wikimedia commons.
Region:
Asia/Pacific
Issues:
Ecology
Climate change