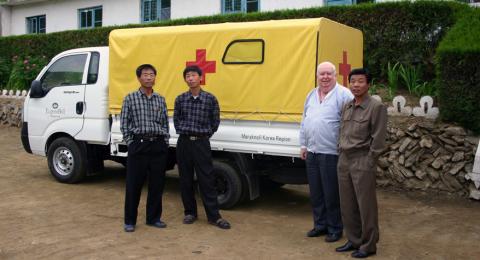 Father Mike Duggan, who was on mission in Korea for many years, writes this week's Scripture reflection.

"Jingle bells, Jingle all the way, oh what fun it is to ride in a one horse open sleigh."

Do you remember your earliest Christmas, the excitement of anticipation wondering when your parents would put up the decorations and start hiding the Christmas presents? In school, Sister would tell us children to prepare for baby Jesus coming by saying Hail Marys and by being good.

A very popular Christmas song was Santa Claus is coming to town. "He knows when you are bad or good so be good for goodness sake."

Santa Claus – God to a little child – was watching our every move and keeping count.

In most homes Christmas was all about the little children, the center of attention, when they saw the brightly decorated tree with an ocean of gifts, so it seemed, waiting to be opened. Someone has said that Christmas was meant for children and so it is if we do not reflect on why Jesus came to be with us and why we have Advent to remind us of the deeper meaning of his coming into a world that desperately needed his leadership and guidance – a world crying for a peace only justice can create.

Today’s scriptures move us beyond our childish understanding of Christmas to a deeper understanding of what this feast is all about and why we need Christmas more than ever. Justice shall flourish in his time and fullness of peace forever. Contrary to the excited preparations we experience for the celebration of Christmas the gospel of Matthew gives us another way to prepare for Christ’s coming.

John the Baptist goes into the desert and exists on locust and wild honey and preaches saying “Repent, for the kingdom of heaven is at hand!” He knows who is coming and why he is coming. Preparation calls for penance and repentance, a straight way to welcome the messiah.

It is the way to open one’s heart to the message that is to come: justice for all, especially for the poor.

The Pharisees and Sadducees came to John asking for baptism but they lacked the essential requirement for John’s baptism. Their hearts were closed to his messages. We know from Matthew’s gospel the Pharisees and the Sadducees will constantly conspire to trap Jesus by devious and specious questions about the law and religion. They prefer the crooked ways of pretension and deception. Christ will charge them to lift the heavy burdens they have placed on the backs of the poor and they will close their ears to his preaching. Justice was not their way of leadership especially justice for the poor.

“Not by appearance shall he judge nor by hearsay shall he decide but he shall judge the poor with justice and decide aright for the land’s afflicted.”

Jesus will suffer and die that justice will be proclaimed as the only way, the straight path, to establish a kingdom of peace based on justice.

Isaiah describes the kingdom and the messiah the Jews waited for as one who would lead them into a kingdom where all would live in peace, the kingdom that will give the poor their rightful place where all will be equal. It will be a kingdom in which “the wolf will be the guest of the lamb and the leopard shall be down with the kid, the calf and the young lion shall browse together with a little child to guide them.”

The seeds of the kingdom have been sown because Jesus has come and now calls us to complete the creation of the kingdom with him. We are his hands as he molds his kingdom. We are his voice defending the poor. We have his heart as our hearts that seek out the tired and hungry so that Jesus’ promise will be fulfilled.

In this time of chaos when wars rage, we are aware that it is the poor who suffer the most. The poor become refugees, they are killed by terrorists and are forced to travel perilous seas and deserts to find sanctuary with the hope of finding safety and a living in strange lands. In the midst of this suffering God raises up prophets who continue to work for peaceful solutions in our own country and overseas. They are prophets who co-create the kingdom of Christ and keep his promise of a kingdom to come.

We think of Dorothy Day who lived and died for the mal-treated worker and the poor in the slums of America. The Catholic Worker continues the work she began many years ago.

We think of Oscar Romero who said our advocacy for the poor will bear fruit even if we do not live to see the success of our labors.

We think of the martyrs of Selma and the thousands who walked for freedom in the South knowing that step-by-step walking the straight path justice would be done.

We think of all those who continue to advocate in the courts of government for justice for the oppressed and for the end of war.

We remember the cry of Pope Paul VI at the United Nations General Assembly: “No more war, war never again.” It inspires us to work for peace. So we gather around the crib waiting for the Savior to come knowing that he has already come and his kingdom has begun as he promised.

Photo: Maryknoll Father Gerard Hammond travels regularly from South Korea to North Korea as an “apostle of peace, an apostle of hope” — not to evangelize directly, which the government would not allow, but to bring humanitarian assistance. Read more about Father Gerard's work in Maryknoll Magazine.