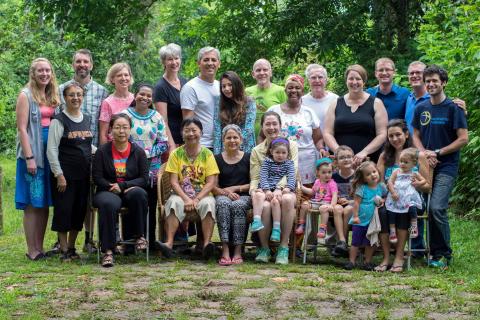 The feast of Pentecost celebrates the moment when the community of women and men who accompanied Jesus recognized a common objective: to spread the gospel by uniting prayer and action to make our world a place where all have "life in abundance.”

As we can read in the second chapter of the Acts of Apostles, they were gathered in one place when they felt compelled to preach in different languages to people from all over the world. Those who heard them were moved and admired their courage.

The first verse of today's gospel emphasizes that the community was gathered in one place. Imagine that you are part of a religious group not welcomed by a more dominant group, as the first Christians were not. In general, you would be careful about calling attention to yourselves. Being together as a big group is dangerous. But the early Christians chose to do exactly that.

In Latin America, even though the Catholic Church was the dominant religious group for centuries, during many years it was dangerous for people to come together in one place to pray and reflect on the relationship of the gospel to the social reality. This happened during the military-led dictatorships which were supported by some national companies and foreign multinational corportations that had interests in the natural resources in that part of the world.

During those times, the Church spoke out against oppressive actions toward impoverished communities and opened its doors for those communities to get organized. The Church was the only place where they felt protected from the military.

Getting together and even being part of a church group cost the lives of many people in Latin America during those years. By standing with the oppressed people, the Church repeated the actions of the first Christian communities.

Today, when so many places are embroiled in violent conflicts, especially in the Middle East, Christian communities are called to find new ways to bring people together for reflection and action based on the gospel. We are called to be prophetic in many different ways, like denouncing violence perpetrated against women and children and welcoming migrants and refugees in our cities.

Pentecost is celebrated in our communities each time we pray and act as Jesus taught us -- to love one another without boundaries of nationality or faith.