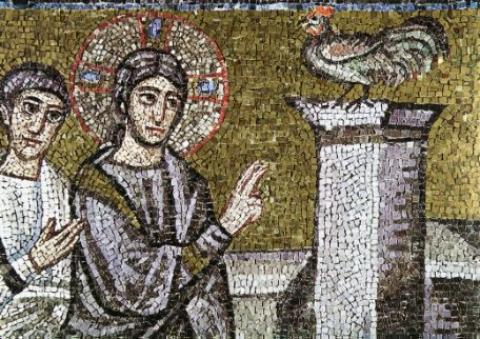 Today’s liturgy offers a preview of the week’s events, beginning with Jesus entering Jerusalem amid admiration and acclamations for his miracles and success. We then move to the stab of betrayal, to abandonment by most of his closest human contacts, to his condemnation by deceit-ridden power structures, and finally ending in death by crucifixion, one of the most heinous and cruel capital punishments ever invented.

Entering Jerusalem triumphantly on the back of a colt most assuredly put Jesus on the fast track to assassination because the political translation of that event mocked the way the Romans entered conquered territories. Victoriously mounted on huge, flamboyantly decorated steeds, they processed proudly down roads flanked by scores of naked, rotting, crucified bodies. Crucifixion was indeed effective for assuring the compliance and subservience of peoples conquered by Rome!

Pain is what jumps out as a constant throughout the whole narrative! How on earth do we handle the level of pain, suffering, abandonment, and desolation that Jesus and his family and followers must have experienced? He did not go to his death serenely, but in agony, to the point of sweating blood and crying out in anguish that the cup be taken away!

For most people, pain evokes considerable fear, a scandal to be eliminated. We spend billions of whatever currency we have to stop it, to avoid it, to abolish it. Many even accept the counterfeit of destructive addictions to circumvent pain, and yet it abides!

As a former Maryknoll lay missioner in Mexico, I was blessed to enter into a ministry with people who have intellectual disabilities in a L’Arche community in the city where I have lived for the past 25 years. L’Arche was founded in the 1960s by Jean Vanier, a layman considered a fountain of spiritual wisdom, awarded the Templeton Prize in 2015, given to individuals who have made truly significant contributions to the spiritual advancement of humanity.

Jean Vanier’s spirituality arose from sharing the pain of people with intellectual disabilities, living in friendship with them and learning to experience the world from their perspective. He states very clearly that “L’Arche is founded on weakness and pain”!

Peter’s denial of Jesus in today’s gospel may have come from his inability to deal with the fragility, weakness, and suffering of Jesus. Perhaps he claims he no longer “knows” Jesus when questioned because his three years with Jesus were nothing like this! Peter had left his nets to follow Jesus the preacher who miraculously healed, who multiplied loaves and fishes, was transfigured and even brought the dead back to life! Huge crowds had hung on his every word, a Jesus powerful enough to inspire Messianic hope in ways never before seen.

Peter was probably broken-hearted by the suffering of Jesus, his fragility and apparent defeat, similar in many ways to the pain of people with developmental challenges, often considered “losers” from the get-go! They feel defeated because they can’t go to a school or a hospital and come out cured! Some families abandoned them. They often experience ridicule or bullying in schools and other public spaces. Indeed, they are seldom seen in gatherings of the well-to-do and highly productive. Many live daily with rejection and see themselves as failures.

We can only imagine the excruciating pain and fear Peter and the other disciples must have felt when they saw their beloved Jesus battered, beaten, ridiculed, spat upon, treated like a common criminal. What had happened to the beauty and freedom of his preaching? When the cock crowed and Jesus looked at Peter, perhaps he remembered and then understood what Jesus had told the disciples beforehand, about being delivered to the powers of evil, about dying and rising on the third day. Jesus had also said that no one could take his life from him because he would lay it down freely! Peter finally did recognize Jesus, in fragility, suffering and defeat and Luke’s gospel hints at Peter's reaction, telling us that he went out and wept bitterly!

Knowing and accepting fully that people with intellectual disabilities live with suffering, L’Arche forms communities that place them at the center, welcoming and accompanying them. It has grown to a movement of over 140 communities in 38 countries, in profound recognition of the humanity of vulnerable people, and of their ability to humanize those who are blessed to accompany them. The secret L’Arche has learned and offers to all comers, is that although pain is real, it becomes bearable when shared, when accompanied with love, care, and concern. L’Arche communities witness to the fact that fragile people invite us into the mystery of our own pain and fear. They call us to solidarity with all who suffer, including ourselves. They encourage us to be brave enough to BE there and to stay, to see it through, learning compassion, which demands presence, requires competence, and leads inevitably to amazing joy, the final hallmark of the presence of God!