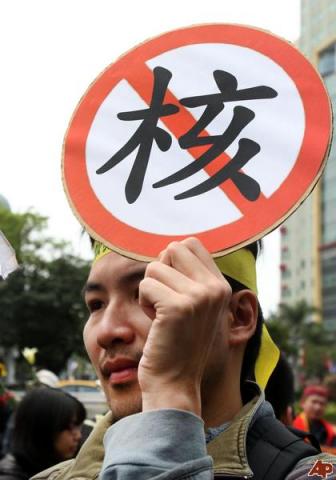 Taiwan, a relatively small island – not quite 250 miles long and 100 miles across at its widest point – has a mere 100 miles of ocean separating it from its massive neighbor, China. At this moment China has approximately 400 missiles aimed at the island; pretty much every square mile of the land is targeted. Under such a massive threat of violence, the people of Taiwan simply continue to live their daily lives. Amazingly enough – just as Jesus does in the two Lucan Gospel accounts that bracket the Palm Sunday liturgy – the people of Taiwan, under the threat of death, still find in themselves the capacity to act with healing, compassion and caring.

Jesus the compassionate healer: In his painful journey to Calvary Jesus’ concern was for others. “A large number of people followed him, including women who mourned and wailed for him. Jesus turned and said to them: ‘Daughters of Jerusalem, do not weep for me; weep for yourselves and for your children’...” (Luke 23:27-28) As he hung on the cross he offered consolation to the repentant thief. “Truly I tell you, today you will be with me in paradise” (Luke 23:43).

One graduate of my women’s self-development courses was unfairly imprisoned for eight months because of her husband’s crime. He had passed a number of bogus checks, using her ID and her bank account. While there, rather than serving that sentence in anger and despair, she got permission to organize some of the other women inmates for a communications-skills course. When the staff of our social service center visited her, she explained that she taught them everything she could remember of the courses she had attended. She told us: “I feel that being able to minister to the other women like this is why God has let me be in this place at this time.” In her compassion and reaching out to others she found her own way to healing.

The journey of discipleship: Luke’s passion account is the only one of the four Gospels that gives more than one or two verses to the “Way of the Cross” that Jesus travelled from the place where he was condemned to the barren hill of Golgotha where he was crucified (Luke 23:26-32). Along the road we are told: Simon is pressed into service to carry Jesus’ cross; a large number of people – including women – followed him; Jesus stops to interact with the women who are weeping for him; two other men, both criminals, are led out with him to be executed. What a diverse collection of people, all literally and figuratively caught up in the following of Jesus – the challenging, not always voluntary, and sometimes bewildering path of discipleship.

An equally diverse collection of people – men and women, young and old, Chinese, Aboriginals, foreigners, Buddhist, Taoists, Catholics, Protestants and others – have committed themselves over the years to a long struggle against the use of nuclear power in Taiwan. The island, small as it is, sits astride not one but several earthquake faults, and, a chain of volcanoes known as “the ring of fire.” Despite this, it supports three nuclear power plants to meet the enormous power needs of its more than 25 million inhabitants. The impact of even one nuclear “accident” would be devastating.

More than 15 years of unflagging efforts to prevent the completion of a fourth nuclear power plant – only eight kilometers from the 5,000,000 people living in the capital of Taipei – has not met with success. Since 2002 many of the same people have joined efforts to urge the government-run Taipower Company to remove its nuclear storage facility from the tiny offshore Orchid Island – home to the Yami Aboriginal tribe which makes up more than half of its 4,000 or so residents and which has suffered sickness and death related to their proximity to the nuclear waste. Although the ravages of the tsunami in Japan in 2011 have given new urgency and energy to this struggle, government promises to close the facility have still not materialized. After 10 years of tireless efforts the people continue to walk this difficult path of discipleship.

Just as the reading from Philippians (2:6-11) describes Jesus’ passage through humility, obedience and death to resurrection, it is to be hoped that the faithful efforts of those committed to promoting life for the people and the earth in Taiwan will ultimately succeed as well.