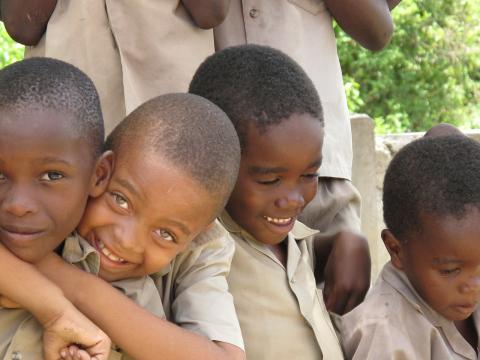 Deacon Matt Dulka works for the Maryknoll Fathers & Brothers' Mission Education and Promotions department. His reflection, below, is also found in A Maryknoll Liturgical Year: Reflections on the Readings for Year B, available from Orbis Books.

There’s the old adage to “be careful what you pray for” because God may give it to you. In the reading from Deuteronomy, God promised the people that he would give them exactly what they asked for, “a prophet like you from among their kinsmen, and I will put my words into his mouth.” Their direct experience with God when he appeared as thunder, lightning, trumpet blasts and smoke on the mountain in Sinai was too much. They wanted God to speak to them through one of their own.

There is nothing really surprising about this. Throughout history God’s mission is carried out through people like us who are God’s messengers. God frequently tapped shepherds, farmers and ordinary folk to serve as prophets. And when humanity still struggled to grasp the reality of God’s love, God incarnated his Word into the human being we know as Jesus. In other words, to simplify it to terms we could understand, God became one of us because it is a lot easier to relate to another person than to a thundering cloud on a mountain.

Today’s reading is set early in Mark’s Gospel as Jesus begins his public ministry in Capernaum, a stones’ throw from his hometown. Mark’s story parallels Luke’s version where Jesus preaches in Nazareth. In both accounts, the people are astounded that a local man, one of their own, a carpenter by trade, could teach with such clarity and authority. Moreover, in Mark’s version the people are amazed that the unclean spirit recognizes that this carpenter’s son speaks with the power of the Holy One and releases its hold on the poor man.

It is significant that immediately before this passage Jesus calls local, ordinary men and women to join him in his mission. By the end of the Gospel, he will pass on the mission to them, telling them to go out to the whole world to proclaim the Good News. Again, we see how God raises up prophets like us, from among our kinsmen to speak God’s word of love.

This fundamental understanding of how God uses people like us in mission is rooted in our understanding of what occurs at baptism. Wiped clean of sin and initiated into the community, we are baptized into that very mission of Jesus: to carry on the work he began and passed on to the Church.

We struggle, however to believe that God would use us to speak God’s word of love. Clearly there must be someone better qualified to do this. But it is not as difficult as it may seem. St. Francis said, “Preach always; use words when necessary.” Often the most effective and powerful way to be God’s Word is through action, a simple witness of God’s love by ordinary people.

This becomes evident on mission immersion trips. When a group of people travel from one country to encounter their brothers and sisters in another country there is frequently a mutual witness and encounter of God’s love by, and through ordinary people. These trips often begin with people focused on the differences in appearance, language and culture. However, through the experience of hospitality and sharing stories, by the end of the trip there is an appreciation of the diverse ways in which God is at work through all of us.

Recently, Maryknoll organized an immersion trip for a group of deacons and their wives to go to Jamaica. A profound and sacred moment occurred during a visit to an AIDS and HIV hospice. The deacons and their wives who thought of themselves as ministers were ministered to by the patients. As they gathered around the bed of one Jamaican woman who had lost both her legs and battled a terminal disease, she mesmerized them with her deep joy and told them how she ministers to the other patients and guests by making sure they know that God loves them, usually through song. As she led them in a rousing rendition of “It Only Takes a Spark,” all were humbled and amazed at how God was speaking through this dying woman.

All around us, God still raises up within and among us ordinary people to speak God’s Word of love so that mission can continue.