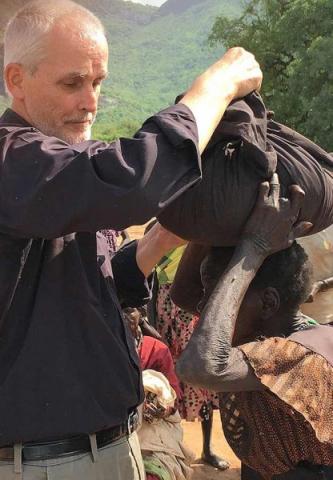 Maryknoll Father John Barth reflects on the light of Jesus shining in all corners of the world, even in refugee settlement camps for South Sudanese people.

One day, at the end of a lecture at a university, a student boldly asked the professor “What is the meaning of life”.

The professor walked to an open window of the classroom and paused, then he thanked the student for this profound question which he then answered with a story.

When I was a young boy, while walking along the road one day, I found a small shard of glass at the side of the road. It was a piece of a car mirror probably broken in a traffic accident. I rubbed the shard against a stone to make the edges smooth and put the small mirror in my wallet. At times, when I was waiting and had nothing to do, I would take out the little mirror and hold it so as to reflect the light of the sun onto surfaces and into dark shadows around me. It was a childish waste of time but in retrospect, I think that small mirror was a metaphor for my life.

A mirror is not the source of the light but reflects the light. I came to understand that my life is like that mirror, an object used to reflect light, not of the sun but of the Son of God.  It was up to me to bring light into the dark areas of the world, places of suffering, corruption, mistruth, or as they say these days "fake news."  To keep my little mirror in my pocket was to display indifference to the wayward paths people and society sometimes take.  It is said that the opposite of love is not hate, by indifference.

My vocation to mission has been an attempt to resist indifference and address the places where darkness lurks in my day.  Like Don Quixote, I decided to do something foolish – to right the un-rightable wrong, to be so bold as to dream the impossible dream.

My dream finds me working with South Sudanese people on both sides of the border between Uganda and South Sudan. I bring relief to those without adequate food through a "Food for Work" program that manages to keep scores of teachers working even though the government stopped paying their salaries months ago.

I spend Sundays celebrating Mass for refuges in one of the newest refugee settlement camps in Uganda set up for South Sudanese people escaping the darkness of war and resultant hunger.

And this is the verdict,
that the light came into the world,
but people preferred darkness to light,
because their works were evil…

One Sunday, the Feast of Epiphany, I told those gathered for Mass the story of the small mirror and how it reflects the light of the sun into dark places. I looked up at the colorful Christmas tinsel that I draped in the branches of the large tree under which we all sat for lack of a chapel.

I said, “See how the sunlight illuminates the tinsel but those parts of the tinsel in the tree's shade left the decoration dull and not reflective in return.”

A missioner is sent to reflect the light of Jesus in some very dark and forgotten places of the world.  But the sun that shines on you also shines on them – giving courage to fight the unbeatable wrong and dream the impossible dream that one day they will return home to South Sudan and again lead a meaningful life.