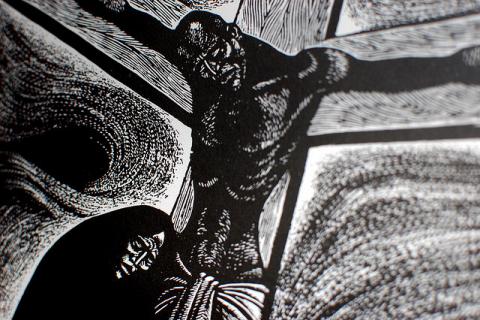 Maryknoll Fr. David Schwinghamer, currently working at the Palabek Refugee Camp in Uganda, home to many refugees from South Sudan, reflects on the great faith of the people of Africa.

During my years as a Maryknoll Mission Promoter in Minnesota I often spoke about the spread of the Gospel in Africa. The great faith of the people that I had met in Africa was a frequent theme in my mission talks. On more than one occasion I spoke about the story of the Catholics of the Sudan and one of their courageous bishops, Macram Max Gassis. Their story is truly one of persistent, prophetic faith in the midst of war and persecution – a faith that not only amazes but transforms those who hear about it. It is also, as Bishop Gassis pointed out to a group of visitors from California, a hidden gift for the entire Church.

The Californian Catholics and a small film crew had come to the Sudan to accompany the bishop on a pastoral visit to the Nuba Mountain area of his diocese of El Obeid in central Sudan. During their trip, the village that the bishop and the film crew happened to visit was attacked by the Sudanese air force. Arial bombing was a favorite tactic used by the northern government in their long war against the people of South Sudan. Fortunately, the crude bombs that were dumped from the back of an old Antonov bomber fell outside the village and no one was killed. Later the stunned Californians asked the bishop what he thought about this attack on the Nuba Mountains village.

His response was inspiring. He explained that for many years the Church in the Sudan have been a recipient Church. Missionaries had brought the Good News many years ago. A lot of outside assistance was still necessary to build up the Church so that it would survive and help reconstruct the country after the war. Then he went on to say that Church in the Sudan is also a donor Church. Through war, drought, and persecution this church participates in the God’s suffering and can see suffering as redemptive, like the suffering that the Son of God endured. He ended by saying that, even though the Christians in the United States had never met the Christians in the Sudan, the Sudanese were having an impact on them, and that “this is what we [the Sudanese] give to the Church. It is our hidden gift.”

Several years after the bombing raid, Bishop Gassis came to visit a parish near where I lived during my time as a Mission Promoter. The purpose of his visit was to thank the people of the parish for their kind assistance to the children of his diocese. I was able to attend the mass of thanksgiving during which the bishop spoke movingly and prophetically of the faith of the Sudanese Christians. He also shared the good news that a peace process had taken root in the Sudan and that there was hope of an end to the war.

After the mass I waited to greet this courageous bishop. I was surprised when so few people came by to say hello to him. Prophets are without honor everywhere, I mused. But then something unusual happened that brought to light the hidden gift of the Sudanese church. A young grade school teacher approached the bishop and told him that since his visit last year, her second graders had been transformed. “They say meeting you was as close as they would get to meeting Jesus.” The bishop smiled and told the young teacher to thank her students for their assistance to the children in the Sudan. At least the children had recognized that a prophet had been among them.

One of the greatest privileges of being a missioner is to get to know people like Bishop Gassis and the people he shepherds in the Sudan. We have seen that they never give up their struggle for justice even when they meet up with people “impudent and stubborn.” We learned that despite many thorns in their flesh – thorns of war, famine and even slavery – they continue to reach out in peace to all Sudanese whether they are Christian, Muslim or traditional believers. Their faith enabled miracles to happen.

All of the readings for this Sunday speak to us of having the courage of our convictions. Ezekiel, Paul, and Jesus of Nazareth all had such courage. But there is another important characteristic that they share: the source of their convictions. All had experienced the contempt and mockery of the proud. Through their sufferings and persecutions all had learned to rely on the One who inspired them to speak the prophetic word no matter what the consequences. Out of powerlessness arose the conviction that God’s grace would be sufficient for them and that, united with the sufferings of their people, the hearts of others would be touched in a way that would give rise to an amazing faith.