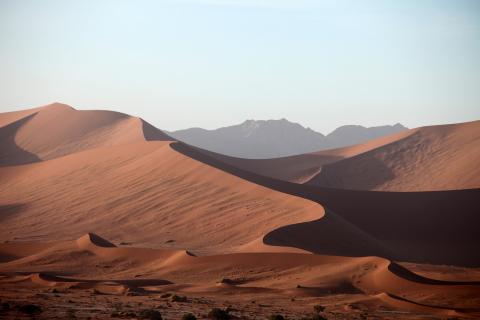 Sr. Jean Fallon, MM, reflects on how Jesus's time in the desert forms him for his ministry as the Messiah, the prince of peace.

In today’s gospel, Jesus, filled with the Holy Spirit, is literally “driven into” the desert after being baptized by John. If you remember, in the scene of his baptism, when he comes up from the water he hears a voice. The voice of the Father speaks directly to Jesus: “You are my beloved Son in whom I am well pleased.” And the Holy Spirit appears visually as a dove.

All four Gospels present John baptizing as an important opening scene, and three of them present Jesus being baptized by him. It is like a beautiful mosaic with each gospel adding a piece of color and light to the story for us. The quote above is from Luke, with the Father addressing Jesus formally, which is slightly different from God’s words in the version from Matthew, spoken to John and the crowd. In using these words for God’s communication with Jesus, Luke reminds us of the words of Psalm 2, verse 7: “You are my son...,” prefiguring Jesus as the “the Son” and Messiah.

With these words the Spirit drives Jesus into the desert to pray and to be tempted by the devil, for the following words of that same Psalm are “Ask of me and I will give you the nations for an inheritance.” So Jesus entered into prayer and fasting to learn how he was to be “the Messiah.” Strangely it was the temptations that instructed Jesus, showing him clearly that he was not to use his power for his own good and that he was not to become a violent national savior. In the desert Jesus discerned his role with the words of Isaiah 42,1-6-7: “Here is my servant... I the Lord have called you for the victory of justice; I have grasped you by the hand to open the eyes of the blind, release prisoners and those who live in darkness...”

Jesus left the desert, and in Luke 4:16: 21 he took his disciples to Nazareth where he declared his nonviolent mission to restore health and life to all people and to teach a new way of living in the face of the power of Rome and the violent aspirations of his own people, who would tempt him to become king.

Here we are today in this violent, destructive age of endless wars against nations and peoples! Jesus as the Chosen One is teaching us today that power is not to be used just because we have it! We are to use our power as Jesus was called to, to free others nonviolently and to heal them.

One day, after a session at the United Nations, I found myself eating lunch with an officer of the UN Peacekeeping Force. At one point in the conversation I said to him, “Wouldn’t it be a breakthrough if all the armies of the world were transformed to help those overwhelmed by natural disasters, rescuing people, re-building destroyed areas and towns?” To my surprise, he agreed with me. Let’s imagine a world in which nonviolent armies are taught not to kill and destroy, but to restore life and assist in new ways of living. Now, years later, with a worldwide climate disaster lapping or burning at our front doors, perhaps this is not so unreal? This is just a thought and an increasingly urgent one.