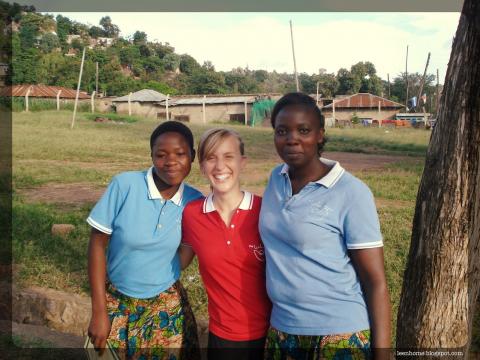 In today’s Gospel from Matthew, we hear the familiar story of the small family – Joseph, Mary, and the baby Jesus – as they begin their journey to Egypt, fleeing their homeland in fear of danger, and eventually settling in Nazareth in the land of Israel.

Like many Catholics, this story is one I revere and treasure. It reminds me of years of Christmases and Masses celebrated with my own family, in which we relived the life and struggle of the Holy Family throughout Jesus’ early years.

Yet since I’ve become a Maryknoll Lay Missioner in Mwanza, Tanzania, the idea of the Holy Family has taken on a new, broader meaning for me.

In Tanzanian culture, family does not simply include parents and siblings. Rather, the notion of family is fluid and expansive, encompassing cousins, far-flung great aunts and uncles, and all manner of half-siblings.

Tanzanian households are a confusing set of relationships for a Westerner to try to understand. Parents, children, sibling’s children, grandparents, and friends can all live under one roof, yet they are all referred to as family.

“Ujamaa,” the Kiswahili word for “familyhood,” extends out into the greater community as well. Strangers greet one another on the street, calling each other Brother, Sister, Mother, or Grandfather, as one deems appropriate. This language immediately creates a bond, a sense of belonging in the community.

I remember the immense pleasure I felt when the young women with whom I worked stopped calling me by my first name and instead, started calling me “Dada Ashley” or “Sister Ashley.”

The cultural tradition of ujamaa is not only heard in the language but also seen in the way that Tanzanians live. They care for one another as members of one larger, African family. Tanzanians pride themselves on how few people in their country have died as a result of starvation throughout history. No matter how little food they have had throughout their history, they have been and remain dedicated to feeding one another, not allowing anyone to die from hunger.

I wonder what the United States would look like if we took some Tanzanian traditions to heart! How would our culture, and our collective life as a society, change if we thought of one another as brothers and sisters? What if we looked at our population as a nation not as disparate ethnic, social, and economic groups but one familyhood, one ujamaa?

In the gospel of Matthew, we hear, “Joseph rose and took the child and his mother by night and departed to Egypt.” From this passage, we can rightly imagine that Joseph and Mary were filled with fear and anxiety, unsure of what they would find in a new and strange land, doubting whether they had made the right decision.

On September 24, 2013, Pope Francis addressed the World Day of Migrants and Refugees by saying, “Migrants and refugees are not pawns on the chessboard of humanity. They are children, women, and men who leave or are forced to leave their homes for various reasons, who share a legitimate desire for knowing and having, but above all for being more.”

One of the young Tanzanian women with whom I work, Teddy Deogratius, knows the reality and consequences of being a refugee and subsequently, an immigrant, all too well. Born in Rwanda, she lost both of her parents in the Rwandan genocide and was forced as a child to flee to nearby Tanzania with her grandmother and other relatives, unsure what kind of life they would find on the other side of the border.

Teddy now lives in Mwanza with her husband and two sons and is a confident peer educator at my ministry, the LULU Project. The LULU project educates young Tanzanian women about financial literacy, health, entrepreneurship, and life skills in order to empower them to depend on themselves, emotionally, mentally, and financially, and to build a network of young women to support one another. The three pillars of Lulu are cooperation (ushirikiano), self-confidence (uthubutu) and creativity (ubunifu).

Teddy remembers the harsh reality of her flight from Rwanda as well as the huge cultural adaptations that had to be made as a result.

"Adapting is a difficult thing to do but really necessary," Teddy explained to me as she outlined her experience as an immigrant. "Without adaption, you can't survive." When she first arrived in Tanzania, Teddy found that even the conservative Tanzanian dress code, wearing skirts and dresses, was foreign to her. "Even around my male elders in Rwanda," she told me, "it was very normal for me to wear shorts!" Teddy also told the story of how she didn't even know how to greet people in Tanzania. "I saw girls bending down on their knees to greet elders, and I didn't know how to do that!"

Because of her experience as a refugee and a migrant, Teddy shows a particular capacity to serve and to welcome new young women into the LULU Project, which serves all young Tanzanian women in the city of Mwanza. Similarly, from my brief experience as a Maryknoll Lay Missioner, being a stranger in a strange land, I am awakened to the struggles and realities of life for all of those forced, for whatever reason, to cross borders into a new land.

In Laudato Si’, Pope Francis states, “We need to strengthen the conviction that we are one single human family. There are no frontiers or barriers, political or social, behind which we can hide, still less is there room for the globalization of indifference.”

On this Feast of the Holy Family, may we go forward, without fear, confident in the knowledge that we are one Holy Family, one ujamaa, and we are called to treat each other as such.