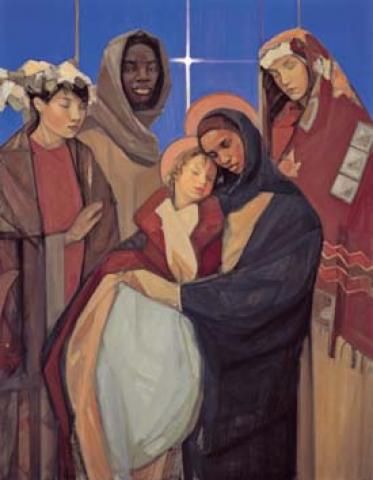 “Arise, shine; for your light has come,” proclaims Isaiah, referring to a time when people who had once been dispersed gather again. It’s the dawn of a new age, a new time in history where things are radically different from the past. The feast of Epiphany has always fascinated me because it is a celebration of a very new way in which God interacts with human history – and it comes about through the participation of a starry night that signals to visitors from afar, as well as to shepherds in nearby hills, to come and see the new thing that God was doing in the birth of Jesus. It is through their profound understanding of (and connection to) the natural world that both the Magi and the shepherds were able to read nature’s signs and know God’s revelation. And through them, Herod – the figurehead of the Jewish people – came to know that something new (and very threatening) was about to happen.

When I lived and worked in Guatemala I would often sit outside at night and gaze at the stars. I lived in a town that had little – sometimes no – electricity, so the sky was teaming with a thick coat of stars, many more stars than I ever remembered seeing as I grew up in Cleveland, OH. I also remember visiting missioners in South Sudan. For entertainment one evening, five foreign missioners sat out in the middle of a nearby field to gaze at the stars. There was no moon and we needed flashlights to walk out to the place where chose to sit. While stargazing I heard someone running by. I could not believe what I heard. The Sudanese man trotting at full speed was so accustomed to the dark that he could navigate the uneven and thorny terrain running in bare feet. Since I grew up accustomed to light bulbs, I could never imagine having such keen eyesight at night.

This reading prompted me to think about the way that the Magi and the shepherds read the sky like a text book. I knew that Guatemalan farmers did the same thing. It’s the stars, the planets and the shape of the moon that tell them exactly when to plant or when to harvest their crops. I know that it was true for the people of South Sudan as well. They can they determine the best places to go to graze their animals all by what the moon and stars say. Many of us who live in more industrialized cities in the northern hemisphere have stopped looking to nature for information; and we really do not often include the natural world in a lot of our decision making.

In the fall of 2012 superstorm Sandy reminded people living on the U.S.’s east coast how important it is not take nature for granted. Sandy reminded us that storms have gained intensity in recent years and that so many of our cities are built in precarious places. The damage caused by Sandy points to the human folly of building a huge, modern city on a tiny island that juts out into a big ocean.

Sandy and other signs of stress that the natural world now shows invite me to wonder whether we are at just such a time as the one the Isaiah was announcing. Perhaps we can begin to look at the new things that God is doing in human history, and more centrally at how God acts on this very earth. Today those of us from the Global North are invited to consider seriously the consequences of trying to subdue nature for our own gain – over and above the notion of working with nature to meet human needs as practiced by the people of desert of South Sudan or the jungle of Guatemala.

Matthew’s gospel describing Jesus’ birth and his first visitors reminds us of the way that God really turns things upside down. It is the wealthy wise men from the east who come and bow down before a child whose family looks like they are the outcasts of society. The shepherds, often reviled for illegally grazing on other people’s lands, are also there – right alongside the wealthy foreigners – the first to recognize and to celebrate God’s breaking through history. And Herod, the guy who’s supposed to be in charge – and know everything that’s going on with the Jewish people, is left in the dark, and wondering how long he might maintain his power.

We have so much to learn. Through Epiphany we are invited not only to think about how well we care for one another – our “fellow heirs, members of the same body, and sharers in the promise in Christ Jesus through the gospel.” (Ephesians 3:6) We must also learn how to live on this Earth entrusted to us, and all Earth’s wonderful ways of communicating to us – without which we’d have no Christmas to celebrate!