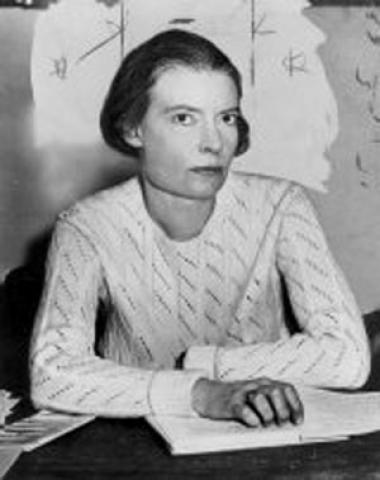 We can look to the life of Dorothy Day, a lay Catholic woman, as an example of how to be a disciple as Jesus taught us.

The gospel reading from Luke is the final section of what is often called the Sermon on the Plain. The parallel to this passage is the more well-known Sermon on the Mount from Matthew. As these titles suggest, there are differences and similarities between these gospel readings.

When Jesus speaks from the mountaintop in Matthew's gospel, we are given the impression that he is speaking with the authority and voice of God. The mountaintop is a symbol of closeness to God.

In the gospel of Luke, Jesus is teaching on level ground, alongside the disciples and the crowd. Luke presents Jesus' authority in a different light. He is God among us.

In the Sermon on the Plain, Jesus uses parables to teach the lesson of how to be a good disciple.

First, Jesus teaches that one must learn to be a disciple from a teacher, one who can see. Second, before you can be a good disciple and teach others you must take care of yourself. Do not try to take a speck out of your brother’s eye until you have taken the board out of your own. Finally, to be a disciple requires producing good deeds. But to produce them requires the integrity and purity of heart found in the teacher. When people see your good deeds they will recognize the teacher – the Source of all being, our loving Creator and God.

When I try to apply the teachings of Jesus to my modern life in Washington, D.C., I think of Dorothy Day, who founded the Catholic Worker Movement. When Pope Francis came to Washington and spoke to Congress in 2015, he named Day as a leading historical Catholic figure in the United States who has shaped our fundamental values. “Her social activism, her passion for justice and for the cause of the oppressed, were inspired by the Gospel, her faith, and the example of the saints,” the pope said.

Can a lay Catholic woman like myself make a difference in this world? I look to the life of Dorothy Day and say without hesitation: Yes!

Day is a great example of the life of a good disciple. Her faith and compassion, her commitment to nonviolent action and her bravery, are inspiring. Day wasn't afraid to take radical action to transform both herself and society.

Sometimes I join in prayer with members of the Dorothy Day Catholic Worker community outside of the White House. We pray for peace and hand out pamphlets explaining ourselves to people who walk by, to inspire a change in people’s hearts and actions. We do this every year on January 11 to pray for the closing of the U.S. military prison on Guantanamo Bay in Cuba -- where men have been imprisoned without trial by the U.S. government on the suspicion that they are terrorists for over seventeen years. The U.S. government plans to detain these men indefinitely, in violation of their legal and human rights.

Many agree that the indefinite imprisonment of these men at Guantanamo Bay detention center is illegal and immoral but ultimately hopeless because to free these men would require a change of hearts by U.S. policymakers, a transformation to recognize the human dignity inherent to each person. Dorothy Day said “The greatest challenge of the day is how to bring about a revolution of the heart, a revolution which has to start with each one of us.” This is our challenge as disciples today.

“Our problems stem from our acceptance of this filthy, rotten system” Day also said. But Jesus teaches us that we don’t have to accept the status quo. Jesus, through his life, death, and resurrection teaches us that, as Day said, “the final word is love.”

Day explained love like this: “We are all one. We are one flesh in the Mystical Body as man and woman are said to be one flesh in marriage. With such a love one would see all things new; we would begin to see people as they really are, as God sees them.”

Inspired by Day’s faith, her actions and writings, I believe a hopeless, immoral situation such as the indefinite detention of people at Guantanamo Bay prison can and will be changed because hearts can be transformed. We are capable of seeing each other as we really are, as God sees us, and we will do so someday, because we know the final word is love.