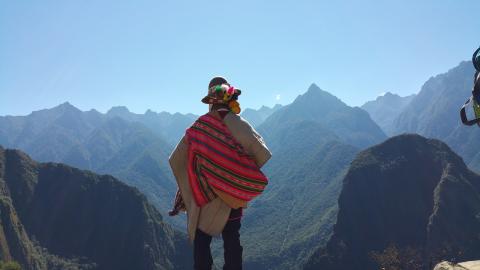 No one can serve two masters; for a slave will either hate the one and love the other, or be devoted to the one and despise the other. You cannot serve both God and money.
—Matthew 6: 24

When I was a pastor on the high plateau of the Andes in southern Peru, most of the people I served were poor farmers – campesinos [peasant farmers] with their small family plots of land for growing potatoes, grains, vegetables. The large ranches for raising cattle and sheep were owned by wealthier families. A small percentage of highland peasants worked on the large ranches as dependent serfs, in some cases considered property of the owners.

The majority of campesinos lived in self-governing indigenous communities and family-owned land; some shared a single community pasture. At harvest time they helped each other and celebrated giving thanks to God. The harsh weather was always a factor in growing crops that could sustain a family on the Peruvian highlands.

Young people often craved migrating to the cities on the coast to seek their pot of gold. Many who left ended up losing the security of community and traditional religious culture of highland rural life. Their self-worth was often beaten down by having to scrounge, beg, or steal to survive in the big cities.

When young people spoke to me about their desire to leave for the cities, I counseled them to put their trust in God, get educated in the tools they would need to earn a living, and know their self-worth. They were not just objects of the wealthy to be used in society solely for profit and gain.

In the encyclical Laudato Si’ Pope Francis says, “The biblical accounts of creation invite us to see each human being as a subject who can never be reduced to the status of an object.” (#81).

The pope goes on to say, “Yet it would also be mistaken to view other living beings as mere objects subjected to arbitrary human domination. When nature is viewed solely as a source of profit and gain, this has serious consequences for society.... Completely at odds with this model are the ideals of harmony, justice, fraternity and peace as proposed by Jesus....” (#82)

Looking at our own history, we see that the European conquerors of the American Indians saw the Earth not as holy ground, as the Indians did, but as a commodity to be plundered and exploited. The First Nations lived in harmony with the natural order. The great chiefs of indigenous peoples across the Americas have repeatedly taught that humans do not own Mother Earth – we are guardians of it.

Many people around the world are struggling for their very lives. We see the vice of excessive capitalism where greed of profits is the bottom line in plundering our mother earth, preventing the development of clean energy with our continual use of coal and oil that are polluting the environment, profiting the few who build walls to keep the impoverished majority out.

We are indeed out of harmony with the natural order. E. F. Schumacher writes in “Small is Beautiful” that we need an economic system structured around the needs of communities, not corporations.

We can begin to make a big difference through many small acts of goodness. Blessed Mother Teresa said, “If you can’t feed a hundred people, then feed just one.” She also said, “We must become holy, not because we want to feel holy, but because Christ must be able to live his life in us. We are to be all love, all faith, all purity, for the sake of the poor we serve.”

Jesus does not promise us prosperity but calls us to die to selfishness and bear our daily crosses joyfully as loving servants of God.