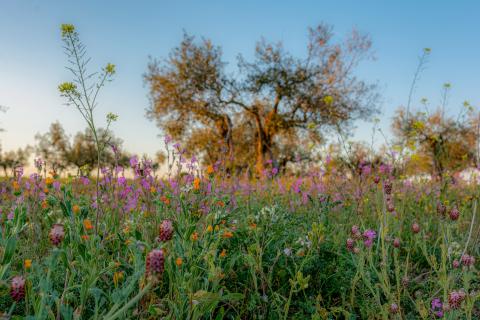 Sr. Roni Schweyen, MM, reflects on how the joy of Easter gives us strength for the Christian life.

“But God had raised Him, not to be seen by all, but by certain witnesses that God has chosen beforehand.”

The Easter Sunday story continues to be one of surprise. Even though during his life Jesus had spoken of his dying and his rising, his disciples had never understood it. Even in our lives, it would be a great shock to us if we went to a grave of someone we love and found that the grave was open and empty!

Mary Magdalene had come to the tomb where she planned to anoint Jesus body with precious nard. She had come very early in the morning, maybe because she thought that others would not be there so early. We know that Mary Magdalene had been healed by Jesus and she had joined the other women who were ministering to Jesus and his disciples.

Because Mary was so shocked at seeing the stone rolled away and seeing that Jesus’s body was not in the tomb, her first reaction was to convey the message to Peter and the other disciples. She could have thought that they might be able to answer the question, “Where have they taken him?”

All of these happenings, which took place on Easter morning and which are described in the Scriptures, are what confirm our belief and give credence to Jesus, who fulfilled the Old Testament predictions about the Messiah. The great mystery which the Gospels describe is that, because Jesus was faithful unto death, he arose in glory on that first day of the week.

All of these happenings which are written about in the Gospels are the basis for our belief that Christ is the anointed one, the Holy One of God. In today’s reading it is John who follows Peter into the deserted tomb and sees the burial cloths there. Then he sees the cloth that had covered Jesus’s face, which was folded and placed on the tomb. After seeing this, “He believed what Jesus had foretold.” Seemingly seeing the cloth carefully folded and placed there had convinced him that it had not been grave robbers who had taken Jesus.

Easter is the time of “New Life,” and it is a time for us as followers of Jesus to get our faith life on fire again. In the second reading from Colossians it states, “We are made alive in Christ.” This means that our faith must be more than just words - it must be alive in all of our daily activities.

Our faith life is made strong by the examples of others who have shown how they lived their faith. I consider the life of Franz Jagerstatter as an example of a life lived in Christ. He was a farmer in Austria during the time of the Second World War. His faith prompted him to become a conscientious objector, as he knew that he could not kill another person. Germany had invaded Austria and the country then began to follow the Nazi regime. Franz was called into the infantry for basic training, but he came to the realization that it was an unjust war and he could not take part.

After the basic training he returned to his village of St. Radegund to be with his wife and three young daughters. Franz refused to do the salute to Hitler, and he was ostracized in his village. One of the village leaders came to Franz and tried to convince him that if he could just say that would follow the Nazi leader then his life would be saved - but Franz was not moved. Later, the village priest who knew Franz well came and also tried to say that if Franz just made the outward show of a salute then he would not be put in prison. Franz refused again.

Life became very hard for Franz and his family. Franz was following his conscience and could not be dissuaded from his convictions even by the Bishop of his diocese. He accepted the consequences of his decision and was imprisoned, and in 1943 he was convicted of treason and executed. This story gives us an example of a man whose conscience guided by faith made him resist the evil that he saw. His faith was alive and sustained him through his sufferings. His life was portrayed in a recent film, “A Hidden Life.”

The Easter Story shows us Jesus who was totally obedient to God and gave himself up freely. He became the First among the faithful and the founder of the new group of believers, the Christians.

The lines of a poem written be Gerard Manley Hopkins also testify to the Easter mystery: “Our King back, Oh upon English souls, Let him Easter in us, be a dayspring to the dimness in us, Be a crimson-cresseted-east” (Hopkins, “The Wreck of the Deutschland”).