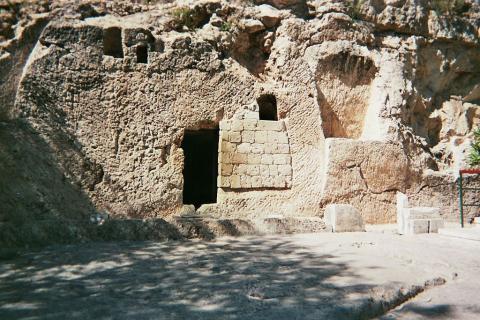 Maryknoll Father Rodrigo Ulloa-Chavarry, who was ordained a Maryknoll priest in 2011, is currently serving in China.

Once upon a time, there was a king who didn’t have any sons or daughters. For that reason, he was looking among his close advisors for his successor. But he heard a rumor that all of his close advisors were not the people he thought they were. Word got to the king that these advisors were cheating and extorting people to increase their greed. To see if the rumor was true, the king decided to test his advisors.

He invited the entire people of his kingdom for lunch. Everyone knew where the king lived but what they ignored was that he king had placed a bog rock in the middle of the road a kilometer away from the palace. Underneath the rock, the king placed an envelope. Hiding behind some bushes, the king waited.

As time went by, lots of people arrived including his close advisors. Sadly enough, none of his advisors seemed to pay attention to the rock. No one took the time to remove it so as to prevent an accident or the like.

Seeing it with his own eyes, the king was said and furious because he realized that his close advisors were only interested in lunch but not on the road that led to lunch. The king was angry at their unwillingness to move the rock.

This is the day when we focus on a tomb that has but one single door: A rock.

It’s a big rock that separated light from darkness, life and death, a dead body or a risen one. All of the faith that people placed on Jesus comes down to a rock that is soon to be opened. Some people though may only be interested in the rock but not on the person who will remove the rock.

Here in East Asia the words “way” and “rock” are represented by Chinese characters that are widely used in both written and verbal contexts. In this part of the world, it is a custom to put a large rock with a special inscription on it in front of a new building. The inscription usually contains a peace mantra or a series of blessings or a poem to invoke protection or success for those who enter and those exit the building.

Today our Church celebrates Easter. The Holy Spirit removes the rock from the tomb but not before writing on it, “He has risen! Come and See!”

Let’s return to the story of our king:

Not knowing what to do, the king simply sat there, confused, sad and angry at the lack of compassion from his advisors.  Just as he was preparing to return to the palace, he heard someone coming. It was a farmer with his family on the way to the palace. Upon facing the rock, the farmer looked in all directions, put his bags down and asked his wife and his children to help him move the rock to the side of the rock.

Together they moved it.

When they turned around, they spotted an envelope in the middle of the road. Curious to see what was in it, the farmer picked it up and opened it. With a royal seal stamped on it, the note on the envelope read, “If you can move the rock, you can also move mountains. You are the next king.”

Our religion has a fabulous ending: Someone today moves a rock from a tomb. Alleluia.

Photo: The Garden Tomb, a rock-cut tomb in Jerusalem, which was unearthed in 1867 and is considered by some Christians to be the site of the burial and resurrection of Jesus. Photo by Utilisateur:Djampa via Wikimedia Commons.