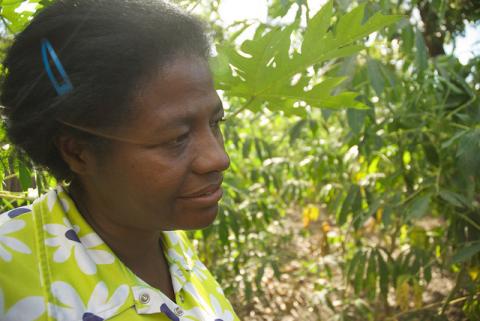 Kathleen Bond, a Maryknoll Lay Missioner who serves in Brazil, wrote the following reflection which was published in A Maryknoll Liturgical Year: Reflections on the Readings for Year B, available from Orbis Books.

Today is All Saints’ Day. As people of faith, we honor prominent, well-known figures such as St. Francis and St. Clare but I believe today’s gospel is also inviting us to look around and celebrate the saints among us. When I reread the words “Blessed are those who hunger and thirst for righteousness, for they will be filled” many of the women that I have accompanied over the last 13 years in northeast Brazil came to mind. One woman, Dona Neura Pereira, stands out and I would like to share her story with you today as we rejoice in the ordinary but extraordinary living saints who touch our lives through their courage, resilience and enduring hope.

Will you join us at the meeting of the hungry? This invitation began Dona Neura Pereira’s journey from an illiterate sugar cane cutter to a leader of the landless movement in the semi-arid state of Paraíba in northeast Brazil. It was late 1988. Dona Neura and her family, along with 70 other landless farmers, were living on a sugar cane plantation that was going bankrupt. The families were starving because the plantation owner had stopped paying the cane cutters in a severe drought. The situation was so dire that Dona Neura recalls subsisting on coconut water for days. At the meeting, the group decided with the help of a local priest to secretly organize to go to the ministry of labor in the capital to protest. After five tense days camping out in front of the ministry building, they were able to negotiate two weeks of pay and food rations. In the end, the plantation owner never paid the workers but Dona Neura´s hunger and thirst for justice was awakened.

The northeast of Brazil has one of the worst distributions of land in the world with approximately one percent of the population controlling almost 50 percent of the arable land with much of the tracts dedicated to crops for export. Despite of the 1988 constitutional amendment guaranteeing land reform, redistribution has occurred primarily by groups of landless farmers occupying idle tracts. In 1995, the Catholic Church’s commission for the landless invited Dona Neura to join one of those groups. At that time, Dona Neura had been organizing women cane cutters for better wages on another plantation. The owner had tried to block her organizing activities by giving her the worst jobs in the most isolated areas. Since she refused to quit, the plantation manager resorted to burning down her house. A week later, she joined a group of 104 families that occupied a plantation near the small town of Espírito Santo. Dona Neura was the only person from her family who initially went to the land occupation; not even her husband had the courage to join her.

While assisting the Catholic Church’s efforts to raise international attention to the plight of the landless, Dona Neura invited me to offer workshops because many of the women were demoralized after living more than a year in black tarp tents. As the course opened up a space for the women to share their struggles and joys, I witnessed a thirst and hunger for fullness of life, the saving activity of God. Maria das Neves held a pencil for the first time in the group. Carmelita learned to make an antiparasite jelly for her children out of herbs in her back yard. After many years of living in fear of her husband’s drunken rages, Teresa began to find the strength to confront him. Sueli, one of Neura’s daughters, became more active in the community and eventually ran for city council in Espírito Santo. Neura and another of her daughters, Solange, began experimenting with recipes learned in the course and now they sell organic produce, sesame seed cakes, and prickly pear cactus juice at a weekly farmers market initiated by a local Catholic group to provide a market and incentives for small organic producers.

More than 10 years later, as I walked with Dona Neura and her grandson on seven hectares of land in a piercing equator sun, we arrived at a tree she planted upon receiving her land title. Nestled in the middle of her manioc and sweet potato crops along a small river, the tree stands alone. She shares, “I come here every day to pray. I suffered so many injustices in my life. I never knew my father who died when my mother was pregnant with me. We were so poor that I could not learn to read or write because I had to start working in the sisal fields at the age of seven. But I am happy. I was persecuted but God was with me and I was able to continue to struggle to get this little piece of land. God comforts us and gives us the strength to continue fighting. I still accompany others who are struggling to get a piece of land. It is a journey that we cannot stop walking. One has to have hope that all will experience justice one day.”

Blessed are Dona Neura and all of us who hunger and thirst for righteous, for we will be satisfied.