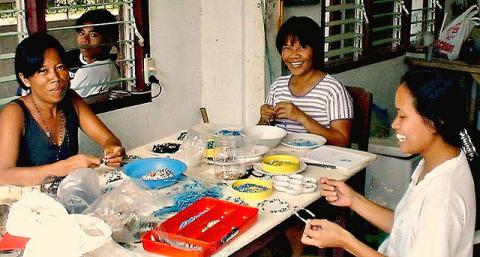 The following reflection, prepared by Sr. Helen Graham who has served in the Philippines for many years, can be found in A Maryknoll Liturgical Year -- Reflections on the Readings for Year A.

“…for you are all children of light and children of the day; we are not of the night or of darkness.”  First Thessalonians 5:5

The aunt of a friend of mine had a jewelry business in the province about a two hour ride south of Manila. When I visited, I spent one whole day just captivated watching the process by which a man’s ring was produced. The process began at 8 a.m. with the firing and melting of a gold nugget, to shaping it into the form of a ring, to its hardening and finally, by 5 p.m., the setting of gem stones in place to make a finished ring ready for the man who ordered it. This woman had a business in her home with a workshop where craftsmen were busy fashioning various types of jewelry. Her entrepreneurship reminds me of the wise woman in today’s first reading who managed her household with skill, economic talent and personal virtue. She certainly was someone who “[looked] well to the ways of her household, and [did] not eat the bread of idleness.” Consequently her children “call her happy” and her husband “praises her.” She had no fear for her household, rising “while it is still night and provides food for her household.”

Psalm 128, which serves as a response for this reading, presumes that the entrepreneurial character is the man of the house! The woman is pictured not in terms of production but of reproduction: “Your wife will be like a fruitful vine within your house; your children will be like olive shoots around your table.” In Philippine culture it is, very often, the woman who is the skillful one who manages the family economics with grace and strength. Surely the woman in the first reading presents a different picture than that of the gospel man who received the one talent and, out of fear of the master, buried it in a napkin because he knew that the master was a harsh man, reaping where he did not sow, and gathering where he did not scatter seed. The fearful man’s talent was not only unproductive but depreciated in value in the meantime. When the master returned he asked for an accounting, and the fearful man, who had nothing to show, was judged severely.

While the fearful man of the Gospel is condemned for his fear, the “capable wife” of Proverbs 31:10 is lauded as someone who is to be praised because she “fears the Lord.” The responsorial psalm was probably chosen because it does indeed offer praise for the one “who fears the Lord, who walks in God’s ways.” The psalm considers such a one “happy,” or “blessed,” or “fortunate.”

The Hebrew phrase “fear of the Lord” is often misunderstood, especially by those who use it to give a distorted picture of the God of the Old Testament. Today’s readings present us with two types of fear. The fearful man of the gospel expresses an immobilizing type of fear that rendered him incapable of productive action, preventing him from investing his one talent. By the way, one talent was no small amount: D. J. Harrington, in his commentary on Matthew, suggests that “it was a large sum (like a ‘million dollars’ or ‘a huge amount’ in modern speech).” The woman of strength was praised because she “feared the Lord,” such a fear arises out of a profound awe and love that makes one concerned lest one bring displeasure to the beloved, who in this case is God.

The first and third readings allow us to reflect on the economia, providing images of a God-fearing woman who is economically productive, and a servile servant who is exceedingly fearful and, therefore, totally unproductive. These readings of the final weeks of Ordinary Time, however, also direct attention to the theme of eschatology (the final things), a theme that will figure prominently during the coming season of Advent. The gospel passage has its own peculiar meaning within the context of Matthew where it is the third in a series of parables “dealing with attitudes and behavior.” Most often this eschatological dimension is overlooked by, what Harrington calls the “usual moralizing approach” that result from the translation of the Greek unit of coinage, talanton, as “talent” understood as an ability or capacity. We are told to use our talents to the best of our ability thus failing to take into account “the eschatological horizon that is essential to the parable,” which highlights the return of the master and the accounting. The Matthean version, as Harrington points out, “clearly concerns the coming of the Son of Man and how one should behave in anticipation of it. Its message is positive action instead of fearful or lazy inaction.”

The God-fearing woman of the first reading engaged in positive productive action, whereas the timid servant of the Gospel parable was so afraid of failure he chose not to act at all.