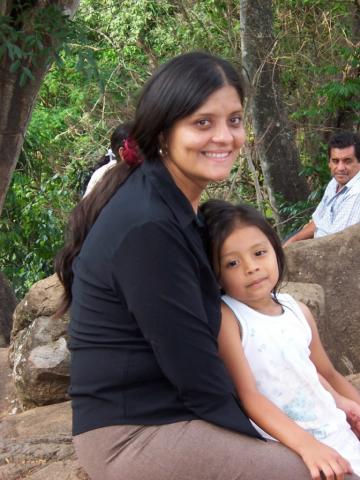 Our Gospel today offers a critical study on the art of listening, and more precisely to whom and how we listen. “[The rich man] said, ‘… I beg you to send [Lazarus] to my father’s house – for I have five brothers – that he may warn them, so that they will not also come to this place of torment.’ Abraham replied, ‘They have Moses and the prophets; they should listen to them.’ He said, ‘No, father Abraham; but if someone goes to them from the dead, they will repent.’ He said to him, ‘If they do not listen to Moses and the prophets, neither will they be convinced even if someone rises from the dead.’” Listening, nothing has struck me more profoundly as a missioner in Cojutepeque, El Salvador.

My ministry here takes place in a zone of extreme poverty where I work with a small Christian base community and the youth of this community. Nearly 30 years ago this area, known as La Esperanza, meaning hope, became a squatter settlement for people fleeing the civil war. Many people migrated here from the villages surrounding the town of San Vicente where the fighting between the guerilla and government forces was particularly fierce. The people arrived here around the mid-point of the war, in 1985, and by the time the peace accords were signed in1992, most people could not return to their homes or villages as there was simply nothing left to return to (the military practiced a devastating scorched earth strategy in the war). Today the people of La Esperanza remain refugees in every sense of the word; most do not have title to the land on which they live, or services such as sanitation or suitable housing. It is a shanty town.

Yet the people here do not refer to themselves as poor. What you hear from people most often is their love for children and animals, for fireworks and music, for oven baked bread and tamales, and the hope for their kids to get into good schools.  But there is also the automatic weapons fire (La Esperanza is close to the dividing line between two major gangs), and the babble of a stream that is so contaminated that not even the village dogs go near it as the nearby slaughter house dumps so much waste into the water that every afternoon the waters scream red.

And when you get even closer you hear a 13-year old boy, whom I’ll call José. He lives with his grandmother and told me he never uses his mother’s last name, only his father’s (in El Salvador people normally use both family names). When I asked him why, he said, “My mother left for the states when I was little. I haven’t heard from her since.” There is hurt and anger in his voice and this combination of emotions has developed two distinct patterns of thought in youth, immediate survival and escape. Often the result of this mentality is weapons, drugs, and money. (“The different fates after death are not based on the rich man having lived a life of vice, and Lazarus having been very virtuous; they are based on the rich man having had a comfortable and well-fed life, while Lazarus was hungry and miserable.” — An Introduction to the New Testament, Raymond E. Brown, page 250.)

To hear all this raises questions: Why do our politicians in the north, in their war on drugs, more often mention the inability of Latin American countries to control the flow of drugs from south to north and seldom mention their inability to control illegal smuggling of guns from north to south? (Ninety percent of the weapons in the hands of gangs and drug cartels in Latin America – Mexico’s drug cartels also operate in Central America – are manufactured in the United States. Read more here.). And why doesn’t the Central America Free Trade Agreement mention the protection of the environment, and when the documents do refer to such protections, why are they not enforced?

And what about the estimated 500 Salvadorans who leave the country daily in order to try and find work in the north, why is scarcely a thing mentioned about international trade agreements flooding tiny, poor countries with plastic and synthetic shoes and clothing that can be bought for a dollar while thousands of local shoe makers and tailors are out of work?  And what about the multinational companies that do not pay living wages to Salvadoran workers or allow them to unionize? (Underemployment and unemployment combined total 45 percent in El Salvador-- UN Report of Human Development in El Salvador 2007-08)