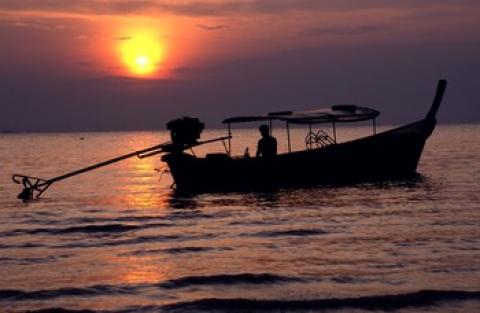 Jesus refers to all sorts of people in his parables and teachings: Jewish and Roman authorities, observers of the Mosaic Law and those who flout it, the strong and able and those beset by demons, the very rich and the very poor. In today’s gospel he speaks of a wealthy landowner.

Cambodia has a lot of wealthy landowners. They are markedly different from the landowner in the gospel, though. The gospel landowner was wealthy and powerful but he was also generous. He really cared about those who worked for him, hiring more workers than he probably needed, paying some of them much more than they might have thought they earned.

In contrast, the rich and powerful of Cambodia are often complicit in evicting the poor from their land; in illegal logging and the destruction of the forests the poor depend on; in selling public lands, buildings, even lakes; and generally enriching themselves to the detriment of the poor.

The workers in the gospel were landless casual workers and many of the workers in Cambodia are in a similar situation, their plight exacerbated by the Pol Pot Era when the Khmer Rouge abolished money and destroyed all records, including land titles. After the war, when the present government seized power, party loyalists were rewarded with land and today there is a strong plutocracy of tycoons who support the government so that the government will support them.

On the other hand the poor, especially ethnic and tribal groups, often find their lands taken away to become plantations for the rich, and their ancestral territory and forests seized and sold.  At the same time corruption is rampant; health, education, and other services are almost non-existent in some areas; there is a general lawlessness except when the law is applied on behalf of the government against its opponents; and basic infrastructure is woefully lacking.

What does the gospel today say to the people of Cambodia and to the people in other countries who find themselves in such situations?

First, that things can be different.  There can be good men and women—represented by the gospel landowner—in positions of power, people who really care about those they govern and who want to develop the country for all and support the common good.  The populace in Cambodia must never give up hope but must encourage and support those who work for change.

Secondly, the gospel tells us who our God is.  Our God is a God of abundance who gives good gifts, more than is required by justice, who supports our needs and rights, and who offers  life, love, and forgiveness.

Many today in our own time do not see this gospel so positively.  Probably more negative reaction is directed at this parable than at any other story that Jesus told.  Many church-goers, influenced by labor law and union rules and with an awareness of Catholic Social Teaching and social justice, see the landowner as unjust.

But the gospel story is really not about pay scales, wages, and workers’ rights.  That’s not Jesus’ point.  The story is about a God who gives us more than we have a right to, who wants to bless us with more.

Another consideration about God’s abundance is that in Matthew’s time, when the gospel was written, the parable addressed another, special circumstance.  Matthew was writing about fifty years after the death of Jesus and his readers fully expected the Second Coming in their lifetime.  But what would happen when Jesus returned?  Would those who had come to faith in him from the beginning have a higher place in heaven?  Would there be a distinction between them and those who, for whatever reason, came to believe only later?  The parable of the landowner reassured them that all would share equally—and fully—in eternal life, in the rewards God promised to those who accepted and followed Jesus.

This generous, caring God, symbolized by the landowner, is a sign, a promise of hope for the dispossessed, and is the basis of a gospel message that can inspire and encourage.  Our place as people in mission is to be with the dispossessed, the alienated, the marginalized whether in a developing country or in a city or town in Europe or North America or Australia. Our role is to help them reflect on their situation and to know the God whom we love and who loves all of God’s children.

That is what mission is today.