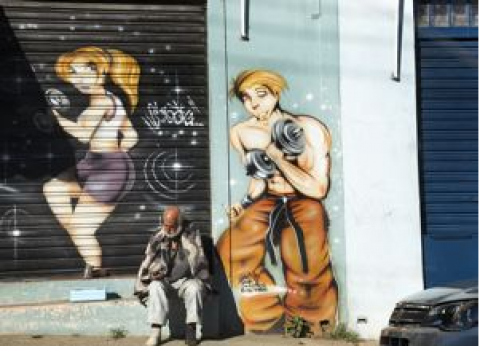 I met Aldenor at the Sunday liturgy at the Church of the Homeless People -- his story is a similar one among the more than 10,000 people who live on the streets in São Paulo.

Aldenor worked as a bricklayer in Maranhão, a state in the northern region of Brazil. His wife got sick and most of his salary went to pay for her medication and treatment. He was laid off from his job and, after his wife died, he lost their house. He lived on the street for months with his two children, who were eventually taken from him.

In his words, “I was at the bottom of the well with no hope. I came to São Paulo in search of work so that I can eventually get my children back to live with me. I’ve been homeless and hungry living on the streets.”

Aldenor’s story is similar to Jeremiah’s plight. In the first reading, we hear that Jeremiah was thrown “into the cistern” where he “sank in the mud.” Zekediah, the king, only agreed to release the prophet because he believed that Jeremiah’s death would cause riots among the starving population of the city, something that the king hoped to avoid. Jeremiah has been called the prophet of hope and doom. He consistently denounced the evil deeds of the rich and powerful and the consequences of their actions for the majority of people. He suffered years in prison but never gave up hope. Overwhelmed by his experience of God’s call, he spoke out time and time again against the status quo that keeps so many people in oppression and poverty.

How do we respond to God’s call to denounce injustices? How do we speak and work in favor of the 1.4 billion people in our world who live at the survival level of $1.25 (or less) a day and lack basic necessities of food, water, education, healthcare and shelter are lacking? How do we respond to climate change and ecological destruction on our planet?

Our Gospel today is a difficult one to hear. Jesus tells us that he has come to bring fire to the earth. What is this fire about which Jesus speaks? In Biblical times, fire was a sign of God’s presence and also a symbol of purification and, at times, fear and division. Perhaps a fire needs to be ignited in us so that we may respond to the needs of our brothers and sisters and our suffering planet?

Jesus uses powerful language in speaking about how one household will be divided against another and members of the same family will be divided. If we truly live out gospel values, there are consequences in our lives, both for the present and the future. When we prioritize getting along with others or external peace ahead of faithfulness to the Word, we fail in kindling the fire of the Spirit. Consumerism, intolerance and greed are preached by many in our society. Making decisions for gospel values is divisive. Including the immigrant, the prisoner and the one different from me may cause conflicts and challenge family and society norms. Yet, we remember that we are surrounded by a great cloud of witnesses, who will help us “run with perseverance the race that is set before us” to live out the mission of Jesus.

Aldenor can testify to the words of today’s psalm that proclaims the faithfulness of God. “[God] drew me up from the desolate pit … and set my feet upon a rock, making my steps secure.” Aldenor has found a way to keep faith and hope alive by participating in the church’s pastoral that works with people who are homeless. He has been able to get seasonal work as well as participate in educational workshops and a recycling project that works to stop ecological destruction.

I participate in the Sunday liturgy where men, women and children who are homeless come to worship and pray together. For many, it is their only community and family. I am always humbled by the generosity of these folks living on the street or in shelters. They consistently share the little they have with others and their intercessory prayers are usually about the suffering of others in this world, those who are starving, sick, living with war or violence.

With the help of this group, Aldenor is actively working to be reunited with his family. In his words, “I am learning what it really means to have a generous and compassionate heart. I felt so alone and excluded. It was another homeless person who initially reached out to me and brought me here. I thank God for helping me find hope and courage.”

Jesus and Jeremiah suffered for their message of inclusion and solidarity. May we be strengthened in our ability to suffer for the sake of others. May the fire of the Divine Spirit truly be kindled in us so that we may have the courage to more actively work for peace and justice in our communities.