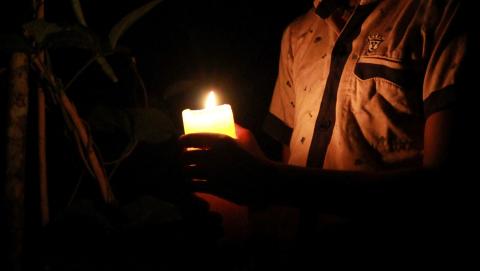 The prophet Isaiah proclaims that the people who walked in darkness have seen a great light. He was talking about his own time, some 700 years before the birth of Jesus, when Israel/Judea was oppressed first by the Assyrians and then the Babylonians. The destruction of the Israeli capital of Samaria in 721 BCE was one of the most devastating in the annals of that era. Where was the light to be found?

Likewise, when Jesus was born, the Jewish people in both Galilee and Judea were oppressed and exploited by the Roman Empire, with collusion by the elite leaders of Jerusalem such as the Sadducees, High Priests, and the Herods, an imperial conquest that at times was brutal. This is narratively portrayed in the gospels by Matthew’s account linking Jesus’ birth to the insanely paranoid rule of Herod the Great, who had no compunction against the killing of children under age two – and in fact, history reports that he killed his own sons, so fearful was he that one would wrest his rule from him.

Luke’s gospel links Jesus’ birth to a census: a tax on every free man living in Palestine, ordered by the Roman Emperor Augustus while Quirinius was governor in Syria, about the year 7 or 8 CE. It was at that time that a man named Judas the Galilean led a group of rebels and run-away slaves in Galilee to revolt against Roman imperial rule, especially slave labor, a revolt that resulted in the crucifixion of Judas and many other rebels. Jesus was either old enough to see the men hanging and dying on the crosses or would later hear about it in graphic terms while growing up in Nazareth. In the first thirty years of the first century, the Jewish people of Palestine were clearly walking in great darkness.

As an adult Jesus, committed himself to be the light in the darkness, in conformity to Isaiah’s prophesy that a child would be born who would rule with justice and peace. But Jesus’ method would not be the Roman bludgeon of military conquest but the gentle outreach to people of all nations to be reconciled with one another and live in communities that cared for each member.

In the world of today, certainly in recent years, we have experienced a series of convulsions that could perhaps be described as “walking in darkness.” We are now approaching three years of living with one of the deadliest viral pandemics in human history, which has taken over one million lives in the United States and over six million worldwide. And the pandemic is not over yet. This year we have witnessed a brutal, unjust invasion of a neighboring country by Russia, for dubious reasons known only to the mind of the Russian president, an invasion that has resulted in 17,000 Ukrainian civilian casualties by the end of November, according to the United Nations, of whom over 400 were children killed in the conflict and over 750 more injured. And the UN says that this is without doubt a gross undercount. This year has also brought us undeniable evidence that the climate is drastically changing, bringing with it more intense storms, constant widespread wildfires, heat waves, expanding drought conditions (particularly in some of the poorest parts of the world, in equatorial and tropical regions), disturbing changes in oceans that can cause a collapse of many species of marine life, plus threats to the abundant biodiversity on both land and sea. The darkness is not only figurative; it is reported that growing numbers of young people do not want to have children, so fearful are they of what climatic conditions will be in the second half of this century.

I myself was impacted by this. A woman I have known for over twenty-five years died suddenly in Kenya of pneumonia in September, probably as a result of a virulent form of flu that struck the southern hemisphere during its winter from June to September. Her death leaves behind two children who are now complete orphans, as she had separated from her husband due to domestic abuse. Fortunately the children have a loving extended family. Still, it is hard to comprehend how traumatic their mother’s sudden death must be for them.

Christmas is a season of hope, that God is truly walking with us – or as John’s gospel in the Mass of Christmas Day says: “The Word has made a dwelling among us.” At times it can be difficult to find faith and hope in the midst of the calamities taking place in the world, but Christmas reminds us that the birth of the child in a manger is truly a sign that God will be victorious. It is also a clarion call to people of good will to not only see God at work but to participate in God’s work of reconciliation, justice and peace.

This Christmas let us not be overwhelmed by the troubles afflicting us but put on the armor of faith, hope, and love.