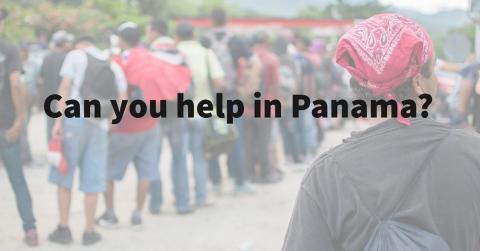 Maryknoll Sisters issue urgent call for short-term volunteers to care for migrants in the juggle of Panama. The following article was published in the September-October 2022 issue of NewsNotes.

Panama’s Darién Gap, a 5,000 square kilometer expanse of hostile jungle terrain that links Colombia to Panama has often been referred to as the “plug” between South and Central America. By virtue of its almost impenetrable terrain of steep mountains, dangerous rivers, and non-existent roads, few ever dared to pass through it.

That plug has been pulled, due to the desperation of tens of thousands of migrants seeking a viable path to the United States. More than ten times as many migrants passed through this area in 2021 compared to the previous year, and numbers are doubling monthly.

While the migrants hail from around the world, some from as far as Senegal, it is the migrants from just one country who are massively descending upon the Darién Gap’s vast jungle, sometimes dying in the process. That nation is Venezuela. More Venezuelans crossed the Darién Gap in the first two months of 2022 than in all of 2021.

A little over a decade ago, Venezuela was Latin America’s wealthiest nation, home to the world’s largest oil reserves and to millions of Latin American refugees who fled repression and dictatorships of the 1970s and 1980s. Venezuela’s massive social, political and economic crisis of the past eight years turned that reality upside down.

As poverty and hunger surged in 2015, an enormous wave of Venezuelan migration was set into motion, with almost a fifth of the nation now gone. Most headed to other Latin American nations, often walking to countries as distant as Chile. But as nations tightened their entrance restrictions (with the notable exception of Colombia which recently granted legal status to 1.7 million migrants) many Venezuelan migrants have turned their sights to the United States. Some are leaving behind the countries where they originally sought refuge. Others are just now leaving Venezuela. Despite minor economic improvement in the past year, two thirds of Venezuelans are still trapped by extreme poverty.

With daily wages around $3, most Venezuelans are unable to afford a safe mode of transit to try to reach the United States. They are opting to take their risks through the jungle, making their way to the town of Capurganá in neighboring Colombia, the jumping off point to the Darién. They then face ten more days of a grueling journey.

“Deep in the jungle, robbery, rape, and human trafficking are as dangerous as wild animals, insects and the absolute lack of safe drinking water,” says Jean Gough, regional director for Latin America and the Caribbean at the UN Children’s Fund (UNICEF).

In a report by Doctors Without Borders, nineteen-year-old Venezuelan migrant Angel said “I saw at least 10 dead bodies in the jungle. But the worst is the people who get left behind—people who cannot climb the mountains or who slip in the rain and mud. It is a route where nobody waits. You see people sitting down, injured, who might have been there for days, waiting for death.”

If they do get through, this is only a beginning. Before them lies a 2,500-mile journey through six Central American countries, often impossible to cross legally – before they get to the U.S. border. There awaits another enormous challenge.

For the most part, the United States, and the world, has ignored the desperate situation of Venezuelan migrants. Although Venezuela is the source of the world’s largest external migrant exodus in recent years – second only to Syria – Venezuelan migrants have received a fraction of global aid. The Brookings Institute shared the shocking statistic that, by the end of 2020, Venezuelan migrants had received $265 per migrant as compared to $3,150 per Syrian.

Among those responding to this flood of migrants are the Maryknoll Sisters, who have worked for decades in the Darién and are now opening the doors of their Pastoral Care Center. There, Sisters Jocelyn “Joji” Fenix and Melinda Roper regularly train health promoters and preserve 100 acres of native rainforest.

Now, they are turning their energies to preserve lives forgotten by the world and almost devoured by Darién’s jungle. They are urgently seeking immediate short-term help from volunteers who can commit to two weeks to a month. While Spanish speakers are preferred. anyone who can wash the feet and wounds of migrants who have walked long distances would be helpful.

Faith in action: To inquire about volunteering, email cpastoralsantafe@gmail.com