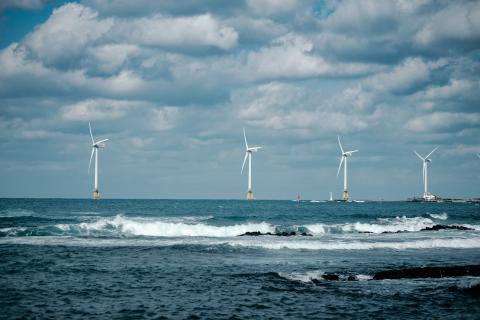 A new report outlines how wind energy can be a major boon for sustainable development on the African continent, amid a global energy crisis, a growing population, and economic downturn following the pandemic. The following article was published in the May-June 2022 edition of NewsNotes.

The Africa-EU Energy Partnership published a policy brief in March that lays out a framework for supporting the growth of wind energy in Africa, which they call “critical” for Africa’s sustainable development over the next several decades. The AEEP is working toward the goals named in the African Union’s Agenda 2063, the continent’s central vision of development for a sustainable future, which aims for, at a minimum, half of the continent’s energy to be from renewable sources by 2063.

According to the brief, Africa only currently uses .01% of its wind energy potential, but the World Bank’s International Finance Corporation estimates that there is enough wind to power the continent’s energy demand 250 times over. The brief explains that, while the per unit cost of modern wind power is low, much work is needed to enable countries to get wind power systems up and running. There is enormous potential for the continent from investing now in wind power as a primary source of renewable energy.

The Africa-EU Energy Partnership is led by several European countries with strong wind power sectors – namely Germany and Italy – as well as the African Union Commission, the Common Market for Eastern and Southern Africa, Egypt, and the European Commission. The authors of the brief say that the European wind power market is particularly well developed, making the EU well-equipped to partner with African leaders to advance the wind power economy.

The authors explain that while Europe has the technological know-how and capital, Africa is resourced with a young workforce, abundant land, favorable wind regimes and a deep demand for affordable energy. The technology for wind power has been significantly expanded and developed in the last decade or so, making it an opportune time to take the leap to invest in wind energy systems to unlock the potential of renewable energy.

Remarking on the potential of wind power, the authors note that if all of the wind power installations throughout the world in 2020 had been put in just Africa alone – and if the grid had been developed enough to distribute it – that capacity would have been sufficient to close the energy access gap in Africa within twelve months for the 600 million people needing it. This enormous potential demonstrates the need for immediate action on the steps necessary for enabling the transition to wind power, such as transmission and distribution systems.

Several African countries are paving the way in terms of wind energy, helping to create a roadmap for scaling up wind power. South Africa, Egypt, and Morocco all have sizable wind power economies, and strong regulatory systems to help manage them. The largest wind farm on the continent is in Kenya, at Lake Turkana. In addition, there are several key African projects working to support the development of renewable energy, including the African Renewable Energy Initiative, managed by the African Union, which aims for “a transformative, Africa-owned and Africa-led inclusive effort to accelerate and scale up the harnessing of the continent’s huge renewable energy potential.” In summary, the authors write, “the political aspirations in Africa are well aligned with the considerable wind potential needing to be unlocked.”

The report names several key steps toward reaching the potential for wind energy production in Africa. One step is funding and constructing an enhanced energy grid to store and distribute the wind energy as necessary. They call this the “most challenging missing step in Africa’s wind journey.” They note that international funding will be necessary for this expansive project, including funding from the Green Climate Fund, established by the United Nations, to which wealthy countries donate in order to help less developed countries adapt to climate change.

Another step is creating regional roadmaps toward wind power production, as the challenges facing each region in Africa are unique. The last step they name is “ongoing capacity development,” or the need for “buy in and alignment at the highest political level and technical understanding throughout the entire economy.” Support for wind energy production from national political leaders is critical, as well as the necessary technical education for energy providers and local workers.

This policy brief echoes calls from other sectors for urgent investment in renewable energy on the African continent, and specifically in wind power. “Now is the time to urgently scale-up wind power in the region... as a driver of local jobs and investment to power a green economic recovery from the pandemic,” Emerson Clarke, Africa Task Force Coordinator at the Brussels-based Global Wind Energy Council, told Reuters in 2021.