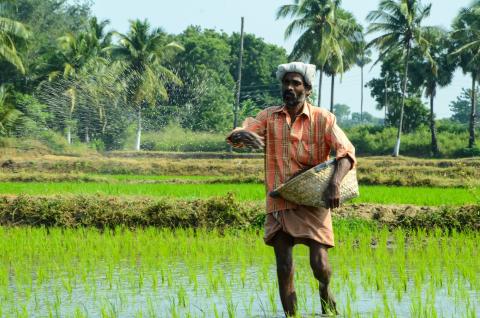 A UN report released after the first-ever Food Systems Summit in September 2021 focuses on enhancing the resilience and sustainability of global food systems. The following article was published in the January-February 2022 issue of NewsNotes.

The United Nations hosted the first-ever Food Systems Summit in September 2021, to focus on ensuring resilient, sustainable agrifood systems around the world. The Summit was particularly urgent given the rise in global hunger due to the COVID-19 pandemic and the increasing threat of climate change to food systems.

In a statement in advance of the Summit, UN Secretary-General Antonio Guterres said that even before the onset of the pandemic, the world was not on track to meet the ambitious goal to decrease global hunger set in the UN Sustainable Development Goals for 2030. Noting the effects of the pandemic, Guterres said that “up to 811 million people in the world faced hunger in 2020 — a 20 per cent increase in just one year. Over 41 million are on the doorstep of starvation.”

“The crisis brought on by the pandemic is unfolding against a planetary crisis that is threatening our climate and life as we know it,” Guterres added. “Food production and local producers are increasingly vulnerable to the adverse impacts of climate change.

“At the same time, recent reports have found that food systems are contributing up to one-third of greenhouse gas emissions, up to 80 per cent of biodiversity loss and use up to 70 per cent of freshwater. However, sustainable food production systems should be recognized as an essential solution to these existing challenges. It is possible to feed a growing global population while protecting our planet.”

The international conference was held entirely online and called a “People’s Summit” due to the efforts to engage people from the local to the global level. At its end, the Summit issued a call to action around five key objectives, one of which was building the resilience of food systems to respond to shocks and vulnerabilities, including due to events such as pandemics and climate disruption.

After the Summit, the UN Food and Agriculture Organization (FAO) issued a comprehensive report known as the “State of Food and Agriculture 2021.” Subtitled “Making agrifood systems more resilient to shocks and stresses,” the report responds to one of the five objectives of the Summit in providing an assessment of nations’ ability to respond to stresses and offering guidance to governments as to how they can improve resilience.

According to the report, the complex web of the world’s agrifood systems produces 11 billion tons of food per year and employs billions of people directly or indirectly. However, there are approximately three billion people who cannot afford a healthy diet, and additional one billion would similarly lack access to healthy food if their incomes declined by one-third due to a shock. The FAO report defines shocks as “short-term deviations from long-term trends that have substantial negative effects on a system, people’s state of well-being, assets, livelihoods, safety and ability to withstand future shocks.” Some examples are extreme weather events, plant and animal diseases, and insects or pests.

The report authors argue that key to ensuring resilience of food systems is the diversification of food input sources, production, markets, and supply chains, because “diversity creates multiple pathways for absorbing shocks.” The FAO’s analysis shows that a country’s food production sector is more resilient when it produces a diverse mix of food and non-food products and sells them to a wide range of markets, both domestic and international. Supporting the development of small- and medium-agrifood enterprises and cooperatives helps maintain diversity in domestic food markets.

Another important factor for promoting food system resilience is ensuring access to food through transport networks. The FAO’s analysis of data from 90 countries shows that many low-income countries in particular have limited capacity to respond if main food transport routes are disrupted. It is essential for all countries to devise network systems that can more quickly overcome disruptions by shifting sources of supply, transport, marketing, and labor.

An additional means for reducing hunger is to enhance the resilience capacities of vulnerable households. The report identifies ways of enhancing resilience at the household level, including by helping families have diversified sources of income and access to social protection programs in the event of shocks.

Other policy prescriptions in the report include the need for better health and education services, gender equality and women’s participation in all facets of the agrifood system, and recognition of agrifood’s role in stewardship of the natural environment.

The FAO concludes the report by committing to take concrete action “in order to transform agrifood systems to make them more efficient, more inclusive, more resilient and more sustainable for better production, better nutrition, a better environment and a better life for all, leaving no one behind.”