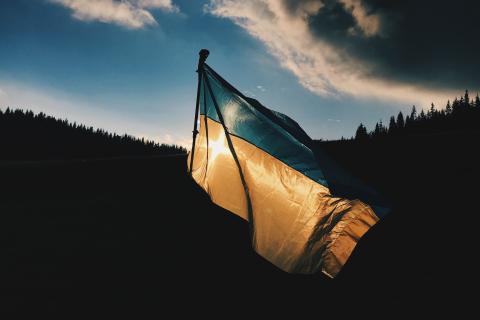 As war continues to terrorize the people of Ukraine, people of faith are advocating and developing nonviolent responses to the ongoing aggression. The following article was published in the May-June 2022 edition of NewsNotes.

Orthodox, Catholic, and Protestant church leaders are seeking to shape effective ways of interrupting, resisting, and transforming the violence that has raged across Ukraine since the Russian invasion began on February 24, and in the eastern provinces since 2014, with an eye toward healing and reconciliation.

Since February, Patriarch Kirill, the head of the Moscow Patriarchate and the Russian Orthodox Church, has found himself increasingly isolated as he has stood by Russian President Vladimir Putin and repeatedly justified the Russian-led war in Ukraine. In a sermon in March, Kirill called the war a “special peacekeeping operation” of “metaphysical significance” in what he sees to be the spiritual differences between a more culturally progressive West and the Orthodox world.

Even Russian Orthodox clergy in Russia and bishops in the Ukrainian Orthodox Church of the Moscow Patriarchate have defied Kirill by making public statements against the war. “If I remain silent, I’m not a priest,” the Rev. Ioann Burdin told Religion News Service, after speaking out against what he defiantly called the “Russian invasion.” Some bishops in Ukraine told their priests to stop mentioning Patriarch Kirill in liturgical prayers. Nearly 300 Orthodox priests in Russia signed a Lenten public letter lamenting the “trial that our brothers and sisters in Ukraine were undeservedly subjected to” and calling for an immediate ceasefire, dialogue, and reconciliation

The World Council of Churches has repeatedly called on Kirill to denounce the war, and prominent voices within the council have called for the expulsion of the Russian Orthodox Church. The Orthodox Peace Fellowship is supporting a number of efforts for peace by Orthodox Christians. In addition, hundreds of Or-thodox thinkers from around the world have signed a statement condemning the “Russian World” teaching often cited by Kirill and Putin to justify the war.

Pope Francis has led a robust effort to end the war, including both powerful pastoral statements and com-plex ecumenical and diplomatic efforts. He has been increasingly clear and unequivocal in his condemnation of violence, pushing back on Patriarch Kirill’s attempts to justify war in religious terms, but also criticiz-ing threats of violence and armed deterrence by NATO and other powers.

“All wars are unjust, as it is the people of God who pay,” Pope Francis said, and, “There is no such thing as a just war: they do not exist!” Francis called the war “sacrilegious because it goes against the sacredness of human life, especially against defenseless human life, which must be respected and protected, not elim-inated, and this comes before any strategy! Let us not forget it is inhuman and sacrilegious cruelty.”

Western leaders purport to be seeking a diplomatic resolution. But NATO members’ emphasis on arming Ukraine and imposing broad, long-term sanctions on Russians, all with the express goal of weakening Rus-sia, suggests that they are more interested in seeing Russia economically and militarily defeated than in seeking a compromise agreement that would more quickly end the violence and save lives in Ukraine, and more readily lend itself to post-war reconciliation.

In contrast, Pope Francis condemns the “perverse and diabolical logic of weapons.” He says, “It is now clear that good politics cannot come from the culture of power understood as domination and oppression, but only from a culture of care, care for the person and their dignity and care for our common home.”

“The real answer,” the pope said, “is not other weapons, other sanctions, other political-military alliances, but another approach, a different way of governing the now globalized world – not showing teeth, as now – one way different than set international relations.” He has called increases in defense spending by Western countries in response to the Ukraine war “madness.”

Meanwhile, faith leaders around the world have been working to support nonviolent responses to the war. Caritas and other aid organizations in the region and worldwide have mobilized to serve and receive refugees. Pax Christi Italy has joined a peace caravan to Ukraine. Leaders of Pax Christi International’s Catholic Nonviolence Initiative have been working with Ukrainian and Polish church leaders to organize an interfaith delegation to Kyiv that would include public prayers for peace.

While the media focuses on the military aspects of the conflict, examples of nonviolence abound. The Kroc Institute for International Peace Studies at the University of Notre Dame hosted a webinar, available to view on YouTube, entitled “Civil Resistance in Ukraine and the Region,” in which peace scholars from Ukraine and around the world highlighted several examples of nonviolent civil resistance, noncooperation and sabotage against the advancing Russian troops. Through courageous community organizing and solidarity “nonviolence has the capacity to transform society” even in the face of war, the peace researchers teach us.