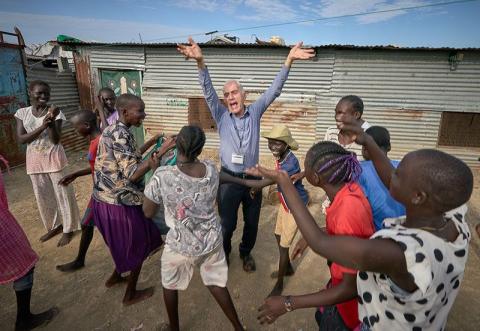 After a two-year delay due to the pandemic, Pope Francis is scheduled to visit South Sudan and the Democratic Republic of Congo from January 31 through February 5, 2023.

As the pope’s visit to South Sudan approaches, the young African country continues to struggle with violent conflict and climate-driven floods and droughts, forcing the majority of the 11 million population to rely on humanitarian assistance to meet their basic needs.

“South Sudan is a country that is beset with a myriad of problems,” Maryknoll Lay Missioner Gabe Hurrish wrote in his Advent 2022 newsletter. “From its inception 11 years ago, there seems to be a never-ending stream of bad news. War, corruption, violence, abuse, economic woes, droughts and floods, pestilence, disease and an overall deficient quality of human life. A person living and working here can easily fall under the spell of despair and hopelessness.”

“Yet, surprisingly, I find there is a deep joy in the hearts of these lovely people,” Hurrish said when describing a women’s meeting of the Toposa people, an ethnic group in the southeastern part of the country where they have traditionally lived by herding cattle, sheep and goats. “The Toposa are the most spontaneous and exuberant people I have lived with, and it is contagious. They especially have the joy of music and dance, an elixir they cannot resist.”

“Dancing for peace” is how the youth group at a parish located in the UN camp for internally displaced persons in the northeastern city of Malakal describes themselves. Maryknoll Fr. Mike Bassano serves as their pastor. “The idea of the dance is to express our worship of God and is a sign of our unity,” Fr. Bassano said in a video produced by Solidarity with South Sudan, an international network of Catholic groups working in the country. “Our dancers are from different ethnic groups. So as the Catholic Church means universal, incorporating everyone, these dancers express that unity as part of the Catholic Church. We grow together working for peace in South Sudan.”

“I like to dance,” said Vivian James, a teenager in the sprawling camp of some 35,000 people. “It brings people together and promotes peace. Our dance is for everyone. Even though we are from different tribes, we dance together.”

The city of Malakal was devastated by civil war ten years ago. Nearly all of its more than 150,000 residents were displaced. Currently, about 30,000 IDPs (internally displaced persons) live in the UN-run camp near Malakal where Fr. Bassano serves. During the last few years, Fr. Bassano has been able to offer food assistance to food-insecure people living in and around the ruins of Malakal.

As South Sudan has repeatedly slid backward into political and ethnic violence during its first decade of independence, voices for peace have continued to call for the country to focus on unity. “We’re trying our best to let the voice of Christ be heard, the peace of Christ be sustained. But the challenge of violence is high,” said Father James Oyet Latansio, a Catholic priest who serves as general secretary of the South Sudan Council of Churches. “So we need your prayers. We need you to hold our hand as we journey through these challenges in South Sudan,” he said. “Don’t get tired of talking about South Sudan or holding the hand of South Sudan. Accompany us as we journey toward the light of hope.”

Fr. Oyet identified Solidarity with South Sudan as a model for mission work in the country. “The Solidarity team includes brothers and sisters from many congregations who have given their time to come to South Sudan to live and work on the ground. They’re not in the peaceful places. They are in the hot spots,” he said.

Fr. Oyet said the members of Solidarity came “in response to the plea of the Catholic Church in South Sudan. They train teachers, nurses, and midwives, as well as people to work in agriculture. And they don’t just work with Catholics. They train evangelicals and Anglicans, as well, transmitting positive values that will help the future of the country.”

Follow Friends in Solidarity with South Sudan on social media to learn more about the papal visit. https://www.facebook.com/solidarityfriends