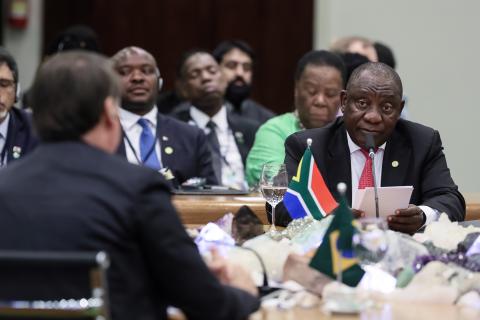 South Africa’s president Cyril Ramaphosa survived two votes in December that threatened his leadership and will face a general election in 2024 that will reveal how much support he retains with the South African people.

In 2018, former anti-apartheid activist Cyril Ramaphosa replaced Jacob Zuma as president of South Africa, home of the African continent’s third largest economy, after Zuma  was accused of graft and removed from power by the ruling political party, the African National Congress (ANC). Already a wealthy businessman, Ramaphosa campaigned as an anti-corruption president and earned plaudits for good governance in his first two years and for his handling of the pandemic in South Africa, where a laboratory discovered one of the first variants of the coronavirus.

However, in June 2022, a former spy boss filed a complaint with the police, alleging that Ramaphosa had hidden a burglary at his farm at Phala Phala in northeastern South Africa rather than report it to the authorities. It was not just a simple burglary; the amount of $580,000 (U.S. dollars) flabbergasted the South African people and resulted in a call for a thorough investigation.
Initially, Ramaphosa arranged for the robbers to be kidnapped and bribed into silence. After the matter became public, Ramaphosa issued a different explanation, claiming the money was payment by a Sudanese citizen for buffaloes and that farm staff decided that the safest place to store the money was under sofa cushions at the ranch house. Naturally, most South Africans have found this explanation incredulous and wonder where the money really came from.

On November 30, a three-person board of inquiry submitted a report to Parliament, concluding that Ramaphosa “may have committed” serious violations and misconduct, had failed to report the theft directly to the police, acted in a way inconsistent with his office, and exposed himself to a conflict between his official responsibilities and his private business. After debate, Parliament decided to have an impeachment vote on December 13.
Despite winning the impeachment vote and the vote for ANC leader, Ramaphosa’s personal reputation is irrevocably stained and his role as president weakened. Furthermore, he has jeopardized important ANC economic and political reforms that he pursues.

First on his reform agenda is an economic reconstruction and recovery plan, in particular addressing persistent power cuts that have devastated the national economy. This includes restructuring the power utility Eskom and other infrastructure development. In addition, unemployment is extremely high and a nagging source of anger, particularly among the youth.

Secondly, on the political front, he wants to unite the highly divided ANC party, which he leads. The Phala Phala scandal has not only wounded Ramaphosa but also grievously hurt the ANC’s chances in what will be grueling national and provincial elections in 2024.

Susan Booysen of the University of Witwatersrand explains: “The ANC built its 2019 election campaign around Ramaphosa, after its polls showed he was the only leader who continued to enjoy substantial credibility among voters.” But his image as an anti-corruption champion – and vote winner – is now in doubt.

After the June revelation of the theft at Phala Phala, business organizations expressed serious concerns.  The influential group Business Unity South Africa stated: “This is a significant crisis for our country and poses high risks that will see further erosion of confidence.”

Dirk Kotze, a professor of political science at the University of South Africa, has written an analysis of ANC’s difficulties.

“Reform is a gradual, incremental program of change or restructuring. Its intention is to change the status quo by restructuring ineffective state institutions, replacing officials, and reconstructing economic policies and practices. Reform should not destabilize the situation.

“The reformer must enjoy credibility and sufficient popularity, and must have a strategic vision and unwavering commitment to the reform. He must be strong enough to overcome resistance.

“Reform depends on astute strategies. For Ramaphosa, success depends on the support of a strong core in the ANC. Therein lies the dilemma: the success of his reform project requires reform of the ANC, which is factionalized and highly corrupt, to make it attractive to voters. This will mean promoting the values of integrity, ethical conduct, anti-corruption and a service orientation. It will mean that some people, including leaders, will have to be removed. But many are resisting and fighting back.”

Furthermore, his focus on foreign direct investment and public-private partnership in infrastructure development, requiring international and private sector support, is not supported by the Left within the ANC, a very important block in the party. Thus, it remains to be seen how South Africa will move forward, with a weakened president and ruling party.

Photo of President Ramaphosa from his visit to Brazil by Palácio do Planalto via WikiMedia, CC