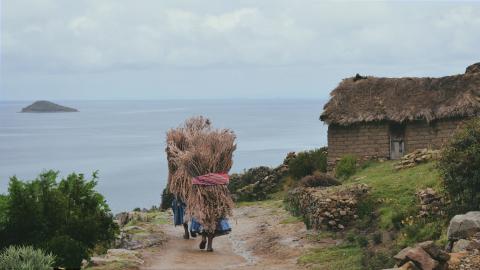 After Charlottesville - After violent clashes between white supremacists and counter-protesters at a “Unite the Right” rally in Charlottesville, Virginia, on August 12 left dozens injured and one woman, Heather Heyer, dead, there has been a much needed national discussion on racism, fascism and nonviolence.

NAFTA renegotiations: Better deal for whom? - The United States has laid out an ambitious schedule and hinted at plans for a new North American Free Trade Agreement with Mexico and Canada.

Cooperativism, Catholicism and the future of work - The New Economy Coalition, of which the Maryknoll Office for Global Concerns is a member, recently launched a new campaign called “Now We Own” to promote the importance of collective ownership in creating a more equitable and sustainable economy by highlighting examples of collective enterprises among its members.

U.S. immigration: ‘We’re all human’ - Darrin Mortenson, who serves as the migration fellow for the Maryknoll Office for Global Concerns, reports on his visit to El Paso, Texas, in July, where he met with some of the Maryknoll missioners who welcome and accompany newly-arrived migrants despite the rising risks and complicated political reality of the U.S.-Mexico “borderlands.”

Trafficking of refugee children - Child refugees in Greece desperate to reach other parts of Europe are forced to sell their bodies in order to pay smugglers to help them with their journeys, according to a recent report from Harvard University

Israel/Palestine: Nonviolent resistance by children - Palestinian children of Bedouin villages in the Negev desert use cameras to document repeated land confiscation and destruction of their villages by the government of Israel.

Venezuela: Causes and effects of the crisis - Democracy in crisis-torn Venezuela is quickly eroding, as the oil-based economy crashes and people grow more desperate for food and medicine. The following article examines how Venezuela came to be in this crisis and how it is affecting the people from the perspective of el pueblo (“the poor”).

Myanmar: Calling out abuse and impunity - International news agencies have reported in recent weeks that thousands of people in Myanmar who identify as religious and ethnic minorities and face severe restrictions inside the mainly Buddhist country have fled to the border with Bangladesh to escape fighting between the military and armed members of minority groups, only to be turned back by the Bangladeshi border guards. Faith groups in the U.S. were scheduled to deliver the following letter to Congress in early September in an attempt to halt a provision in a current defense authorization bill that would increase U.S. military cooperation with the government of Myanmar.

South Sudan: Urgent cries for peace - Violent conflict in South Sudan has resulted in famine in several parts of the country and fueled the world’s fastest growing refugee crisis. St. Mary’s Cathedral in Wau, South Sudan’s second largest city, has become a sanctuary for thousands of people in need of shelter from the ongoing civil war, but with fighting close by, help is scarce and food in short supply.

Resources - Take actions for Creation and for food security, watch videos about the Amazon and the effects of NAFTA, and much more.