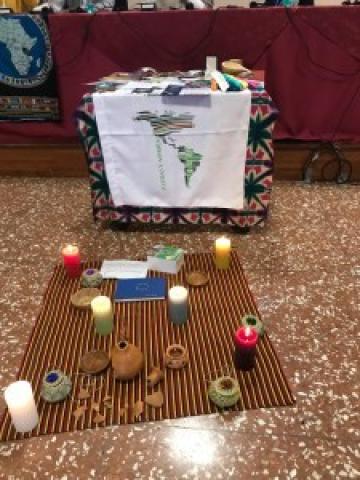 Global voices share the power of nonviolence at landmark gathering, urge Church to enshrine and activate Pope Francis’ call for nonviolence. The following report was produced by the Catholic Nonviolence Initiative.

Catholic Church leaders and local change makers from nearly 30 countries gathered in Rome December 5-7, 2022, to reflect on Pope Francis’ work for nonviolent change throughout his 10-year papacy; to share their own experience of nonviolent change in the face of acute violence and injustice; and to explore next steps in advancing the spirituality, way of life, strategies, and universal ethic of nonviolence in the Church and the world.

The conference, entitled “Pope Francis, Nonviolence and the Fullness of Pacem in Terris,” was sponsored by Pax Christi International’s Catholic Nonviolence Initiative and the Justice, Peace, and Integrity of Creation Commission of the Union of Superiors General-Union of International Superiors General (USG-UISG), in partnership with the Maryknoll Sisters, Maryknoll Office for Global Concerns,  Maryknoll Lay Missioners, and other groups.

“The consistent practice of nonviolence,” Pope Francis writes, “has broken barriers, bound wounds, healed nations.” Since his installation in 2013, Pope Francis has called the Church and the world to “make active nonviolence our way of life.” The pope has implored us to nonviolently challenge and transform systems that oppress, marginalize, and destroy, while also creating new options for justice, peace, and a sustainable world. Nonviolence is Jesus’ path and a powerful means of building social peace.

Together, participants reflected on Pope Francis’ own experience of nonviolence; his vision that so clearly points toward a global ethic of nonviolence in the context of a “world war fought piecemeal;” and the urgent need for a paradigm shift from violence to nonviolence. Woven into the conference were times of reflection and prayer that drew on the beauty of the Advent season to move through the reality of God incarnate in different ways in the world: in silence, darkness, light, humanity, and all of creation.

Harun Njoroge and Sr. Sia Temu, MM, members of the Maryknoll Sisters Peace Team in Kenya, shared their successful experiences of leading “Conversations for Social Change” events where representatives of community groups in conflict come together to deepen their conversation and look for a mutual way forward.
A different logic: Conference participants explored Pope Francis’ many messages, including in Fratelli Tutti, about the impossibility of a “just war.” They heard Fr. Francisco DeRoux, SJ, by video describe the consequences in Colombia of 50 years of what some called a “just war” and the urgent need for a different logic. They discussed the application of a just peace framework that would address the root causes of violent conflict, develop crucial nonviolent skills, break cycles of violence and build sustainable peace.

The closing Mass was celebrated by Cardinal Michael Czerny, Prefect of the Dicastery for Promoting Integral Human Development with conference participants, Bishop Marc Stenger, co-president of Pax Christi International, Cardinal Robert McElroy of San Diego CA, Archbishop John Wester of Santa Fe NM, Archbishop Antonio Ledesma of the Philippines, and Bishop John Stowe, President of Pax Christi USA. The celebration concluded with a recitation of the Vow of Nonviolence in many languages.

Moving forward: In 2016, Pax Christi International co-sponsored with the Vatican the historic Nonviolence and Just Peace conference, which concluded by issuing the Appeal to the Catholic Church to Re-Commit to the Centrality of Gospel Nonviolence. Since 2016, Pope Francis has shared with the Church many groundbreaking resources for the nonviolent journey, including the 2017 World Day of Peace message entitled Nonviolence: A Style of Politics of Peace and his encyclical Fratelli Tutti.

We are grateful for these signposts toward a nonviolent future and look forward to all the ways that the Church will strengthen its teaching and support for the practice of Gospel nonviolence in this time of crisis and opportunity, encouraged by Pope Francis’ message in 2017: “I pledge the assistance of the Church in every effort to build peace through active and creative nonviolence.”