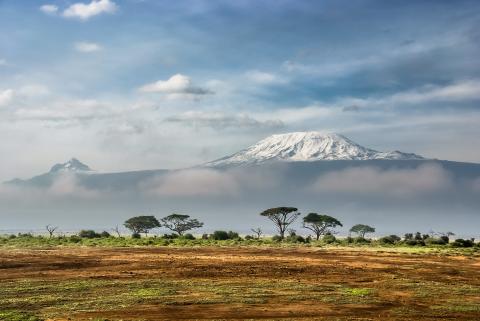 In these times: "Nonviolence or nonexistence" - With ethnic cleansing and extreme violence in Africa, Asia, and the Middle East – and the threat of nuclear war looming on the Korean peninsula – we are looking more closely at the role of the Catholic Church in the work of active nonviolence.

Nuclear disarmament: Diplomacy works - The Trump administration has taken actions in recent months that have raised tensions over nuclear weapons with both Iran and North Korea. In both cases, diplomacy can be used to build trust and avoid military confrontation.

Climate change: World Bank needs ‘big shift’ - The Maryknoll Office for Global Concerns joined the Global Catholic Climate Movement’s Season of Creation prayer and action program for the month of September, which included supporting the Big Shift Global campaign to call on the World Bank to move projects away from fossil fuels and toward renewable energy.

Gambling with nature: A risky investment - The following article was published in the October issue of Encounters, a monthly e-newsletter publication of the Maryknoll Office for Global Concerns’ Faith-Economy-Ecology Program.

Upholding human dignity of migrants, refugees - At each phase of what appears to be the Trump administration’s plan to severe bridges for people forced to migrate, we look beyond the surface of conflict and see others in their deepest dignity.

Maryknoll letter to Congress: Pass the Dream Act - On November 1, the Maryknoll Office for Global Concerns sent the following letter to all Members of Congress as part of a daily letter drive during the first week of November by more than 50 faith-based organizations in support of the Dream Act of 2017. House Democrats are threatening a government shutdown unless Congress adopts protections for Dreamers by December 8.

Prayer for Encounters with Strangers - The following prayer was written by Dr. Ann Carr of the Maryknoll Affiliates for “Exploring Migration” JustFaith Ministries’ in-depth course that invites Christians to study, prayer, and action in a small group setting.

Brazil:  Case for UN treaty on business, human rights - It has been two years since Brazil was hit with the worst environmental disaster in the country’s history when a dam burst at an iron-ore mine and toxic mud swept over villages and into rivers.  Known as the Mariana Disaster, it is now the rallying cry for a UN treaty on transnational corporations and human rights. This article includes material produced by CIDSE, an international alliance of catholic social justice organizations, based in Brussels.

World AIDS Day Prayer Vigil - Join the 24-hour vigil on December 1 to pray for those living with HIV and AIDS and for those whose lives were cut short due to HIV or AIDS.

Israel-Palestine: Women march for peace - Frustrated with the stalled peace process, tens of thousands of Palestinian and Israeli women marched for miles through the desert calling for a viable peace agreement.

Women’s role in peacemaking - Women are the largest group to be affected by violent conflict and yet often have the least participation in its resolution. At the same time, research shows that women are essential to the success of any peace process.

Kenya: Electoral crisis - Ethnicity rather than ideology continues to be the dividing line in Kenyan politics.

Myanmar: Investor advocacy for the Rohingya - The Maryknoll Sisters and the Maryknoll Fathers and Brothers have both sent letters to some of the world’s largest oil and gas companies who are doing business in Myanmar, as a form of investor advocacy on behalf of the persecuted Rohingya Muslim minority.

North Korea: Encounter, dialogue lead to peace - A Maryknoll missioner on the Korean peninsula demonstrates with his life a culture of encounter and dialogue as the way to dispel fears and build peaceful relationships.

Advent Reflection Guide - The new Advent reflection guide for 2017 offers us all a special opportunity to grow in our relationship with God and to deepen our commitment to Jesus' way of life, rooted in love and welcome of the stranger.