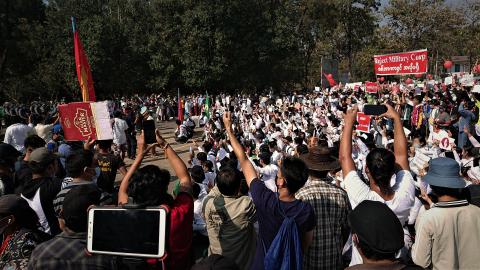 One year after facing criticism for a friendly meeting with junta chief Senior General Min Aung Hlaing, Cardinal Charles Bo of Yangon calls on Catholics to pray for the conflict-torn nation. The following article was first published by UCA News on December 9. 2022.

Cardinal Charles Bo of Yangon says the Church in Myanmar is wounded and displaced as thousands of people are forced to flee their homes, villages are burned and churches are destroyed amid the conflict triggered by last year’s military coup.

“The people of Myanmar have been suffering from the Covid pandemic and political instability for the last two years and thousands of people are homeless and seeking refuge in the camps,” Bo said in his homily at the ordination of two Salesians held at the Shrine of Mary Help of Christians in Nazareth Apostolate School, Anesakahan, near Pyin-Oo-Lwin, on December 8.

The cardinal, who is also the head of the Catholic Bishops’ Conference of Myanmar, has called for peace, dialogue and reconciliation in the beleaguered Southeast Asian nation.

“The only thing we need in Myanmar is love, reconciliation,” he said, urging Catholics to pray for the country and lend a hand to those most in need regardless of race and religion.

The cardinal, however, did not mention the military’s arson attacks on villages including his own.

The latest appeal by Cardinal Bo came just two weeks after his home village – Mon Hla in the embattled Sagaing region – was raided by the military and homes were set ablaze while at least three civilians including a seven-year-old boy were killed.

At least 110 homes that belong to Catholic and Buddhist villagers from Mon Hla who have been living in harmony for decades were destroyed in the November 24 attack by junta forces, according to Church sources.

St. Michael Church, the priest’s house and the convent were not affected by the fire.

The military regime is specifically targeting these three historic Catholic villages in the Bamar heartland of Sagaing in a bid to stamp out growing resistance by people’s defense forces.

Thousands of Christians have been displaced and sought refuge in churches, relatives’ homes and in the jungle under the military’s reign of terror.

Cardinal Bo met with junta chief Senior General Min Aung Hlaing last December when they cut a Christmas cake together, triggering strong criticism from Catholic and other religious communities in the country.

“I do not regret it in any way. We need to engage the major stakeholders in this country,” Bo said in an interview in February. “From day one of the political shift, I sought to meet both the democratic leader and the army. The invitation was always there,” he said.

Bo was one of the six Christian leaders along with Buddhist, Muslim and Hindu leaders who were recently given an honorary award by the junta leader and received public criticism from within the country and abroad.

More than 1.4 million people are displaced across the country, of whom more than 1.1 million have been displaced since the 2021 military takeover, according to the UN Office for the Coordination of Humanitarian Affairs report on December 3.

Photo of Myanmar protest of military coup by WikiMedia Commons