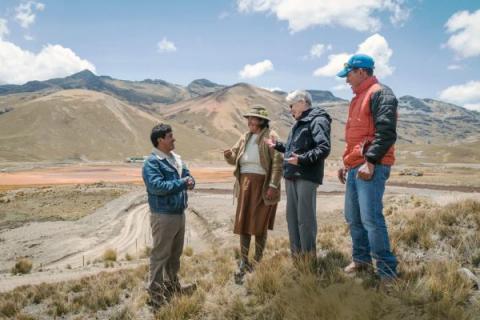 Maryknoll Sr. Patricia Ryan was recently recognized in Peru for her work over nearly 50 years defending Indigenous rights amid land exploitation in the Latin American country. The following article was published in the January-February 2022 issue of NewsNotes.

Working alongside Aymara and Quechua Indigenous peoples throughout Peru, Maryknoll Sr. Patricia Ryan has dedicated her life to implementing nonviolent alternatives to the situation of extreme poverty, violence and environmental destruction.

The National Coordinating Committee for Human Rights, an umbrella group of 80 nongovernmental organizations “dedicated to the education, defense and promotion of human rights in Peru” chose Sr. Ryan as the 2021 recipient of the Mamá Angélica Award, named for the late Peruvian human rights activist and Quechua woman who led a national campaign for an independent Truth and Reconciliation Commission to seek justice for families of the dead and disappeared during Peru’s 20-year "dirty war."

“It is such a great honor to receive this award, especially given that it is in honor of Mamá Angélica,” Sr. Ryan said in an interview published by the Global Sisters Report on Dec. 14, 2021. “She has been a model to all of us in Peru for her courage and her unwavering persistence for years and years until her death in 2017 demanding an accounting for the thousands of people disappeared during the 20 years of political violence.”

Asked by the Global Sisters Report to comment on efforts to build a “just transition” from an economy based on fossil fuels to clean energy, Sr. Ryan reflected on the lessons learned by the Truth and Reconciliation Commission. “They concluded that one of the primary reasons [for the political violence] was the 500 years of exclusion, discrimination and racism lived in Peru,” Sr. Ryan said.

“This context made it possible for those who lived in urban areas such as the capital of Lima to ignore what was happening in rural areas where the Indigenous people were the innocent targets or fodder of both the Shining Path and the armed forces. Their lives simply did not matter; the rest of Peru did not care because ‘they are only Indigenous.’”

“Until discrimination, exclusion and racism are addressed, there will never be real progress or sustainable development,” Sr. Ryan said.

Read more of the interview with Sr. Patricia Ryan in the Global Sisters Report: https://globalsiste.rs/3217aO4