Korea Could Be Place for U.S. China Cooperation 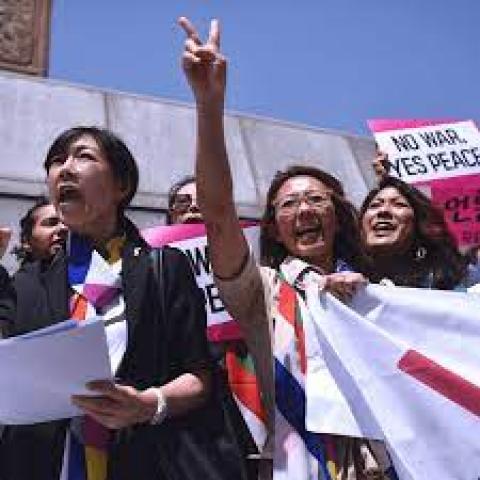 The international peace group Women Cross DMZ point to peacebuilding diplomacy on the Korean peninsula as a much-needed opportunity for U.S.-China cooperation. https://bit.ly/WomenX-DMZ

A new report by Women Cross DMZ, a group of thirty international women peacemakers, shows how the Korean Peninsula has become the fault line for rising U.S.-China tensions. Titled “U.S.-China Competition and the Korean Peninsula: From Confrontation to Peacebuilding,” the report argues that peacebuilding in Korea offers a much-needed opportunity for U.S.-China cooperation, which would help to reduce tensions, build trust, and, most crucially, avoid a possible war: “With tensions running dangerously high on the Korean Peninsula, it is urgent that the Biden administration take a proactive approach through peaceful diplomacy,” said Christine Ahn, Executive Director of Women Cross DMZ. “This report shows that cooperating with China to officially end the Korean War would go a long way toward building a more peaceful and stable Northeast Asia.”
“China’s growing influence and Washington’s efforts to contain that influence through assembling an anti-China alliance in East Asia are promoting the relentless militarization of the region,” said Kevin Gray, Professor in International Relations at the School of Global Studies at the University of Sussex and leading editor of the report.

“This zero-sum competition between the two countries is also having highly negative implications for peace on the Korean Peninsula. However, tackling the seven-decade long unended war in Korea will conversely provide an opportunity for Washington and Beijing to establish areas of cooperation between the two countries while limiting the potential of war in the region.”

“South Korea is increasingly being caught up in the rivalry between the United States and China, which is inflaming tensions with North Korea,” said Youkyoung Ko, an author of the report and representative of the Women’s International League for Peace and Freedom. “Rather than escalating the situation by continuing the arms race, the U.S. and China should work to reduce tensions by cooperating on officially ending the Korean War.”

“There needs to be support for local and transnational civil society peace initiatives to increase interactions across the DMZ on the Korean Peninsula and establish the conditions for genuine peace in East Asia, and beyond,” said Dong Jin Kim, a Senior Research Fellow in Peace and Reconciliation Studies at Trinity College Dublin.

“At a time when U.S.–China relations are veering toward conflict, this report shows the urgent need for cooperation between Washington and Beijing, and it offers a vital issue — peace and diplomacy on the Korean Peninsula — on which U.S.–China cooperation would help all sides turn away from a disastrous great power conflict,” said Jake Werner, Research Fellow at Quincy Institute for Responsible Statecraft.

The four key findings of the report are:

First, U.S.-China tensions have had a chilling effect on relations between North and South Korea, as North Korea has aligned itself more closely with China and Russia, while South Korea has become increasingly integrated into a trilateral alliance with the United States and Japan.

Second, a zero-sum U.S. strategy towards China limits the space for cooperation and has led to a cycle of provocations that could easily escalate into a military conflict on the Korean Peninsula and beyond.

Third, the resolution of the Korean War is an obvious area in which the United States and China, both signatories to the 1953 Armistice Agreement, could work together. Cooperation toward peace in Korea would also remove a key point of contention between them and lay the foundation for addressing urgent global crises such as climate change and pandemics.

The authors of the report argue the United States must pivot away from its current zero-sum approach towards a human security framework that centers frontline communities, prioritizes the resolution of conflict through diplomatic means, and avoids war at all costs.

Faith in action: Read the report from Women Cross DMZ: https://bit.ly/WomenX-DMZ
Ask Congress to support H.R.3446, which calls for diplomacy in pursuit of a peace agreement to formally end the Korean War, establish liaison offices, and review travel restrictions. https://bit.ly/UrgeKoreaPeace
Watch the recording of the second day two the Catholic Korea Peace Forum at Catholic University held on Oct. 6, 2022, to explore ways to overcome the deep distrust between Koreas and the United States. https://bit.ly/CatholicKoreaPeaceForum