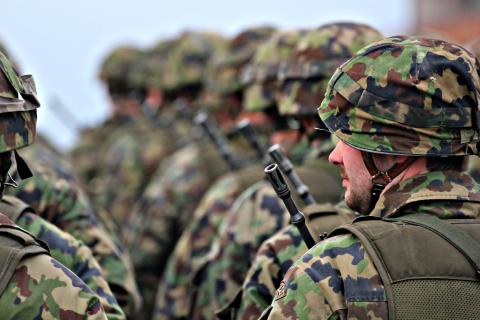 The Institute of Policy Studies’ National Priorities Project offers ways to transition the U.S. military away from environmental destruction and toward more sustainable jobs. This article was published in the September-October 2021 issue of NewsNotes.This article by Shea Leibow is reprinted with permission: https://bit.ly/3gR4iYG

As public opinion shifts toward the belief that climate change is a global emergency, the pressure escalates to transition away from fossil fuels. This year, President Biden put forward a plan to create millions of good-paying clean energy jobs, the Keystone XL pipeline was cancelled, and the United Mine Workers of America (UMWA), a group previously resistant to considering a transition to clean energy, released a report detailing their demands for a clean energy transition.

These moves to transition away from the fossil fuel economy have widespread implications in other sectors of the U.S. economy. The U.S. defense industry, for example, is another economic system that has proven to be unsustainable.

As National Priorities Project’s No Warming, No War report describes, the U.S. military is one of the biggest polluters in the world, producing around fifty-nine million metric tons of greenhouse gas emissions annually. Military bases serve as a major source of these emissions, and the 800 U.S. military bases across the globe ensure that this pollution is not confined to the continental U.S. The act of warfare itself is extremely carbon-intensive and ecologically destructive as well — and this is not to mention the military’s track record of fighting wars for oil.

Despite the environmentally destructive impacts of the military, it also serves as the largest employer in the United States. How then can we make a plan to transition defense workers and communities out of this deeply unsustainable economic system?

This is where the concept of Just Transition comes in handy.

The Climate Justice Alliance defines Just Transition as a concept that details how to move from an extractive economy to a regenerative economy. The concept centers the workers and frontline communities impacted by this transition.

Given that the fossil fuel and defense industries have both proven to be disastrous for our planet and communities, it’s useful to identify lessons from the ongoing fossil fuel transition that may be applicable to a Just Transition away from the defense economy.

Lessons from Past Transitions

The transition away from coal in the Appalachian region resulted in massive job loss, worker displacement, and increased regional poverty.

A key failure of this transition was its reactive and short-sighted nature.

Crafting a plan for a massive economic shift is intimidating — ensuring that all workers and communities are taken care of, even more so.

However, legislation and regional plans for a defense Just Transition do not need to be pulled out of thin air. The ongoing efforts to transition economies, workers, and communities out of the harmful fossil fuel economy provides insights into what works and what doesn’t.