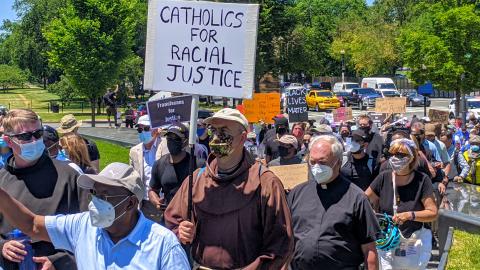 Joint Statement on Anti-Racism: The leadership of the Maryknoll entities and the Office for Global Concerns are responding to the growing anti-racism movement in the United States.

Justice for Immigrants in U.S. Policy: This is a abbreviated version of the brief on immigration as part of our election briefs series, Faithful Voting and Global Concerns.

Climate Change and U.S. Policy: This is an abbreviated version of the issue brief on climate change as part of our series, Faithful Voting and Global Concerns.

Welcoming Refugees in U.S. Policy: This is an abbreviated version of the brief on refugees as part of our election briefs series, Faithful Voting and Global Concerns.

Sanctions: Nonviolent Tool or Lethal Weapon?: This is an abbreviated version of the brief on U.S. sanctions policy as part of our election briefs series, Faithful Voting and Global Concerns.

Diocese of Hong Kong Opposes New Security Law: The Catholic Church in Hong Kong raises concerns that a new security law will threaten the basic rights and freedoms of the territory's people.

Cambodia: Hun Sen to Cement His Dynasty: Cambodian strongman is grooming his eldest son to take over leadership of the country. Read the rest of this article from UCA News by Joseph Benny, published June 26.

Statement on Israeli Annexation: Churches for Middle East Peace, a coalition of which the Maryknoll Office for Global Concerns is a member, released the following statement on April 29 opposing Israeli plans to vote to annex portions of the West Bank.

DACA Recipients Can Dream On: The Maryknoll Office for Global Concerns issued the following statement on June 18, 2020.

International Debt Relief and Aid Needed: There is an urgent need for the United States to offer foreign aid and support the IMF expanding debt relief for vulnerable countries hit by the coronavirus.

Work to Protect Oceans Continues: Ocean ecosystems are vital for mitigating climate change, but they are at risk of collapse due to the ecological crisis.

Resources: Find resources for the 2020 U.S. elections, on anti-racism work, Pope Francis's ideas for a just recovery from the pandemic, and much more.