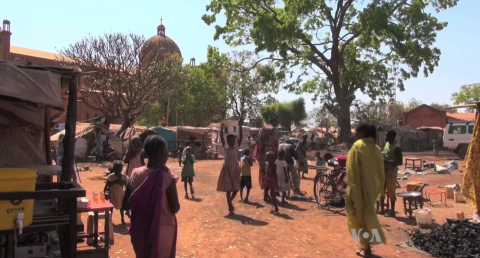 Intercommunal violence and government corruption pose serious challenges for South Sudan during the pandemic. The following article was published in the July-August 2020 issue of NewsNotes.

In March, António Guterres, Secretary General of the United Nations, called for a global ceasefire. He stated, “The fury of the virus illustrates the folly of war. It is time to put armed conflict on lockdown and focus together on the true fight of our lives.” In South Sudan, despite recent promising steps in the peace process, this call has gone unheeded due to ongoing violent conflicts between communities and deeply entrenched political corruption.

The Deep Knowledge Group, a consortium of commercial and non-profit organizations in Hong Kong, has identified South Sudan as the most dangerous country to reside in during the coronavirus pandemic after extensive analysis of the country’s levels of violence and government and economic capacity.

Reports given by Sister Esperance Bamiriyo, a Comboni Missionary Sister in Wau, South Sudan’s second largest city, support such an assessment. As one example of ongoing violence during the pandemic, she states that in April, approximately 7,000 civilians occupied the grounds near the Catholic Cathedral in Wau, taking refuge from armed militias active in the region. However, the fear that COVID-19 would rapidly spread in the congested living quarters led people to reluctantly return to their homes. When they arrived home, as they struggled to collect firewood and begin farming, many were attacked and killed.

This example highlights how state authorities continually fail to protect civilians and manage local conflicts. The UN High Commissioner for Human Rights, Michelle Bachelet, condemned violence in Jongelei State in central South Sudan which occurred on May 16. According to UN reports, from January to March 2020, intercommunal fighting was the main source of violence against civilians and resulted in at least 65 cases of sexual assault, 452 injuries, 592 abductions, and 658 deaths. These conflicts between communities stem from a long history of fighting over natural resources, which include water and grazing land for cattle. Today these conflicts involve military-grade weapons and tactics, acquired through decades of almost continuous war in South Sudan.

The South Sudan Council of Churches (SSCC) strongly condemned this violence in a statement issued on June 17, 2020. “We call for immediate cessation of hostilities and formation of State and Local governments,” the council stated. “We also appeal in the name of God to all our political leaders to value people over and above position, power and party interests.”

Given rampant corruption, South Sudanese leaders are unlikely to respond to the plea of the SSCC to value people over other interests. A new report by The Sentry, an organization which investigates corruption, details how, since independence was granted for South Sudan in 2011, government leaders have co-opted governmental institutions; looted resources; and ignited a civil war, which began in 2013. Although the civil war is over, the report explains that acts of corruption by South Sudanese leaders continue to be linked to international corporations, foreign banks, and foreign governments. Dismantling such a large and tightly woven web of criminal activity will take extensive time and resources in addition to the acquiescence of South Sudan’s leaders.

Assessments of the health care situation in South Sudan during the pandemic have been mixed, but positive reports are likely misleading due to insufficient testing and data. A policy brief produced by the Sudd Institute, a research institute in South Sudan, analyzes mortality in the pandemic and concludes that South Sudan is “one of the least hit countries in the region.” It claims the country performs seventh among 11 regional countries and ranks sixth out of 11 for lowest number of deaths per 100,000 population.

However, the researchers admit that testing in the country is inadequate, leading to an inaccurate picture of the situation. For South Sudan to effectively confront this pandemic, effective testing, contact tracing, and quarantine measures will need to be implemented, as recommended by the World Health Organization. Treatment of COVID-19 has caused so much pressure on the government that David Shearer, the UN Special Representative on South Sudan, has briefed the UN Security Council that the entire health care system could easily collapse and lead to even more deaths.

Faith in Action: On July 9, South Sudan will celebrate nine years of independence from Sudan. Join in prayer for peace and protection during this time of pandemic: https://bit.ly/SSudanIndep