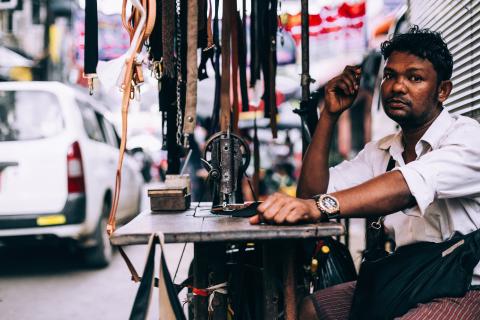 Vol. 42, No. 4
Read the PDF version
Our vision of a culture of nonviolence - Amid the reality of conflict and violence around the world, the Catholic Nonviolence Initiative is working with peacemakers to cultivate seeds of peace.
After Paris: The work for climate justice goes on - President Trump may have left the Paris climate agreement but we, and thousands of others in the U.S., are still in.
Building bridges in the age of migration - The Maryknoll Office for Global Concerns has begun a process of discernment to decide how best to offer compassion and welcome and promote justice and peace for migrants and refugees.
UN: Nuclear ban treaty negotiations - Maryknoll Sister Elizabeth Zwareva reports on the negotiations at the United Nations to adopt a treaty to prohibit nuclear weapons, leading toward their total elimination.
Labour Party proposes ownership reforms - In a stunning turn of events, the Labour Party in the U.K., led by Jeremy Corbyn, defied expectations in a snap general election on June 8 and gained 30 seats in the House of Commons. The following article examines Labour’s proposal for ownership reforms, which, if implemented, could have a profound impact on the U.K. economy.
Ten year anniversary of Story of Stuff - Annie Leonard’s seminal video about consumption was released in 2007, instantly becoming a viral hit, and inspiring a book, in-depth website, and a series of videos and campaigns that fuel a movement for social change.
Philippines: Mindanao, Maute, and Martial Law - Fred Goddard, a returned Maryknoll Lay Missioner and former executive director of the Maryknoll Affiliates who works with the Mindanao Peacebuilding Institute in the Philippines, wrote the following article on June 26, which was Eid al-Fitr, the Islamic holy day that marks the end of the fasting month of Ramadan.
Myanmar: Peace is possible - Cardinal Charles Bo of Yangon, in a message published by ZENIT on June 26, calls for an independent investigation of war crime allegations and appeals for an end to crimes against the Rohingyas minority. On June 30, the government of Myanmar, led by Nobel Peace Prize Laureate Aung San Suu Kyi, denied visas to UN investigators.
Peru: U.S. mining company revives lawsuit - On June 8, the U.S.-based company that owns the infamous and now-shuttered lead smeltering plant in La Oroya reintroduced a lawsuit claiming that the government of Peru violated a trade agreement and cost the company profits by establishing regulations to protect the environment in La Oroya.
Central America: U.S. policy denies human rights - The newly unveiled U.S. policy is of little help to Central American families who live in fear.
Zimbabwe: Bishops appeal for peace in elections - In advance of the general election in 2018, the Zimbabwe Catholic bishops issued a pastoral letter calling on the government and citizens to respect the Constitution and reject the use of violence and coercion.
Africa: Migration trends and patterns - There are numerous influences in Africa pushing and pulling people to migrate either within their country, or across, away from, or into the continent, spreading new ideas and changes in culture.
Africa Rising: The Kilimanjaro Declaration - A new Pan-African movement is gaining momentum in an effort to build strength by joining forces to work for peace, justice and dignity across the continent.
Israel/Palestine: Hope despite occupation - June 10 marked a grim anniversary—fifty years of Israeli occupation of Palestine following the Six Day War.
Resources - Prayers for South Sudan and World Day Against Trafficking in Persons, video about crimilization of protest in Peru, a podcast about innovative nonviolent resistance campaigns around the world, and more.
Photo: Man working along street in Yangon, Myanmar by Peter Hershey/Unsplash.