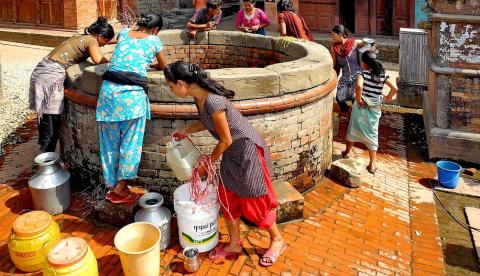 Climate “trial of the century” moves ahead - A group of children has taken the U.S. government – and soon Donald Trump – to court for failing to protect them from climate change.  The landmark lawsuit, Julian v. U.S., first reported in the May-June 2016 issue of NewsNotes is likely to go to trial by Fall 2017.

Environmental justice under President Trump - The challenges facing care for creation are great, but the Maryknoll Office for Global Concerns is committed to protecting and advocating for strong environmental protections in the next four years.

U.S. trade policy after the TPP - Faith communities joined labor, environmental, development, and farm groups in celebrating the demise in the United States of the proposed Trans-Pacific Partnership trade agreement.

U.S.-Mexico border: Radical hospitality - When Maryknoll Sister Lil Mattingly in El Paso, Texas, shared the urgent need for volunteers to help the growing numbers of refugees and migrants there, the Maryknoll Office for Global Concerns sent Alfonso Buzzo, our peace fellow, to live and work at Annunciation House, a home of hospitality in El Paso. In this article Alfonso reflects on his month-long experience there.

Haiti: UN apologizes for bringing cholera - In one of his final acts as UN Secretary General, Ban Ki-moon said the United Nations was "profoundly sorry" for the outbreak in Haiti, which first developed near a UN base in 2010, and committed to mobilizing a response by UN member states.

Cuba: Reflection on life after Fidel Castro - Fidel Castro, known as the father of the Cuban revolution, died November 25. Maryknoll Sister Ann Braudis, who visited Cuba in 2012, wrote the following reflection on the questions that hang over the future of Cuba.

Colombia: Hurdles remain for peace - Colombia's Congress approved a landmark treaty with the FARC guerrilla rebels moving the country closer to a sustainable peace for the first time in fifty years.

WOLA: U.S. must condemn killings in the Philippines - On December 9, the Washington Office on Latin America (WOLA) released the following statement entitled “President-elect Trump Should Repudiate Duterte’s Claims of U.S. Support for His Murderous Drug Policy.”

Africa: U.S. policy under President Trump - As Donald Trump begins his U.S. presidency, many in Washington, Dar es Salaam, and Harare can only speculate on what direction the new president will take in regard to Africa.

World AIDS Day: “Moving forward, leaving no one behind” - Since 1988 World Aids Day is commemorated on December 1 as a day to remember those who have died of AIDS and to unite people around the world in the fight against HIV/AIDS. Maryknoll Missioners at the UN and in countries around the world commemorated this important day.