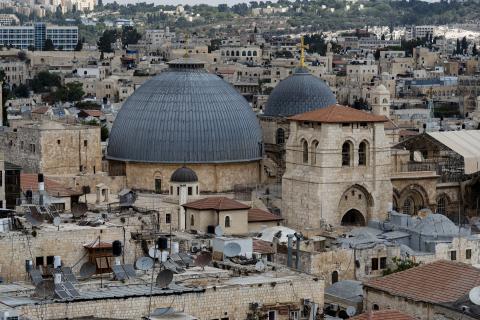 Churches for Middle East Peace, a coalition of 30 national church communions and organizations, including the Maryknoll Office for Global Concerns, joins local churches of Jerusalem in a statement of concern for Christian communities there. The following article was published in the January-February 2022 issue of NewsNotes.

Churches for Middle East Peace (CMEP) remains committed to supporting the sustainability of Christianity in the Middle East in general, and in particular to promoting a shared Jerusalem by Palestinians and Israelis.
CMEP recognizes and opposes ongoing attempts to diminish the Christian presence in Israel/ Palestine.

Christian communities are a vital source of the land’s culture as well as stewards of sites Christians around the world call holy. As Christians prepare to celebrate Christmas, we keep in mind our siblings in the Holy Land who continue to carry the traditions in the place where our faith began.

Therefore, CMEP stands with the Patriarchs and Heads of Churches in Jerusalem calling for urgent dialogue with political authorities in Israel, Palestine, and Jordan. We strongly oppose radical groups’ opposition to Christian communities, manifesting itself now in Jerusalem. CMEP promotes and advocates for the preservation of Christian heritage, especially in the Old City’s Christian Quarter.

CMEP Executive Director Mae Elise Cannon commented, “We are deeply grieved by the ongoing struggles of communities who follow Christ in the Holy Land. Their very presence is under threat and we must do everything we can to preserve the Christian presence in Jerusalem, Israel, and the occupied Palestinian territories."

CMEP invites U.S. Christians to support the Patriarchs and Heads of Churches’ recent statement by sharing it within their own communities. CMEP remains committed to raising the situation faced by Christian communities in the Holy Land with U.S. policymakers as we advocate for the religious freedom of all in the region.

Photo of the Holy Sepulchre Church in Jerusalem available on Pixabay.