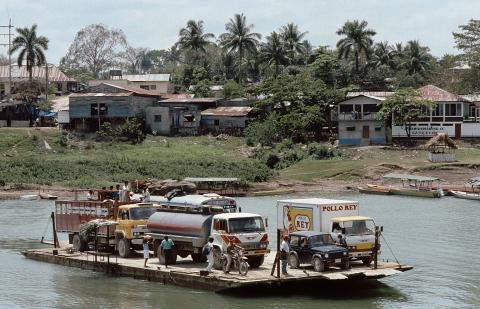 The following is an excerpt of an English translation of a May 25 statement by Fr. Flavio Pereira Tercero and lawyer Ramón Cadena analyzing the root causes of migration in Guatemala, especially the El Petén region, in anticipation of U.S. Vice Pres. Kamala Harris’ June 2021 visit to Guatemala. Mr. Cadena and Fr. Tercero spoke with MOGC and NCR after Harris' visit. This article was published in the September-October 2021 issue of NewsNotes.

A very important visit will happen in Guatemala, Central America soon: the Vice President of the United States, Kamala Harris, will be in Guatemala and Mexico June 7-8. Will she present a set of conditions to persuade the Guatemalan authorities to respect and defend the struggle against impunity and for the rule of law, and thus stop forced migration? Or will her visit be the same as others before it, aimed at convincing authorities to stop forced migration by militarizing their borders? We hope, of course, that the former will happen – that, as a well-known defender of civil and women’s rights, Kamala Harris will maintain her reputation and defend migrant children, women, and men with a human rights approach.

When we talk about stopping forced migration, we must have a clear picture of the root causes of such movement. The goal of allowing people to remain in their communities requires a profound understanding of the realities in the places where forced migration begins.

Guatemala has 22 regional departments, each with its own circumstances which force people to migrate. Whether communities face violence or social conflict due to land disputes, or in response to so-called “mega projects” (hydro-electric plants, mining, tourism infrastructure, etc.), or as a result of organized crime or narcotrafficking, the result is the same. Violence prompts young people, women, and children to flee their communities in search of a better future elsewhere.

People have to flee to other countries (mainly to México and the United States) in order to protect their lives and seek better futures for their children. Stopping this migration is a very difficult task. It will depend on the strength of local institutions, how corruption and impunity are fought, the honesty and transparency of authorities in the use of scarce economic resources, and the extent to which authorities respect the social, economic and cultural rights of the people, as well as their political and civil rights. It has been repeatedly stated that Guatemalan authorities must protect the people living in their territory and make every possible effort to stop forced migration. Instead, now they are persecuting, criminalizing, and arbitrarily detaining community leaders and human rights defenders.

Until human rights abuses stop, forced migration will continue. While this is not a mathematical formula, it speaks to the reality facing the people. Social sciences research has proven that there is more migration in poor countries, where human rights are violated against women, children and the elderly, than in rich countries where human rights are respected. This thesis must be taken into account when addressing the root causes of migration.

Let us consider the situation facing people living in the largest and northernmost department of El Petén, one of the most complex in Guatemala. To stop forced migration, all aspects of the situation must be addressed through an integral approach. In 2019, El Petén had the fourth highest rate of emigration of the 22 departments in the country. Located in the jungle along the border with México, many people must pass through it to enter Mexico en route to the United States in search of a better future. As one community leader who decided to migrate said: “My future is a better place to live in.” He added, “Migrating to México and then to the United States as an irregular worker is dangerous. But less dangerous than living in El Petén, where the justice institutions do not exist and impunity, organized crime, and narcotrafficking surround us.”

Among the most vulnerable communities are in the towns of La Libertad and San Andrés, near Laguna del Tigre. Once one crosses an invisible line, one enters the Laguna del Tigre environmental protected zone, in the north of the department. This invisible boundary is easily identified by the large buildings of the Perenco oil company and by a Guatemalan Army checkpoint, purportedly there to provide security in the region, but in reality to provide security to Perenco and to prevent communities living far to the north inside Laguna del Tigre from bringing in the necessary materials for their livelihoods. This repressive atmosphere leads local residents to migrate to México and the United States.

One of the worst realities facing the people of El Petén is the exclusion they have suffered for years at the hands of the Guatemalan state. In the 1970s, Guatemalan authorities invited people to come to the northern part of El Petén, as part of a repopulation and development project. Years later, in the 1990s, the area was declared an environmental protected zone, prohibiting the presence of human beings.

Treated as objects without rights and not as human beings, the government began to force residents to leave the area. “If they don't do so, they will face forced evictions” a Guatemalan official said, asking not to be named for security reasons.

The people of Laguna Larga moved to the border with México and are now living under extremely inhumane conditions in the jungle. The Guatemalan authorities have not been able to provide a sustainable solution for this community. In other words, the communities brought to El Petén in the 1970s have suffered constant threats of forced eviction since the law establishing the protected zones passed in the 1990s.

A total of 57 communities (around 60,000 people) live in the protected zone, under the threat of forcible expulsion. The mayors of La Libertad and San Andrés are both accomplices in this dreadful crime. We ask ourselves: what human being can stand this threat or this torture? In November of 2016, a representative of these communities presented to the authorities a proposal for solving the uncertainty and implementing a development project in the protected zone which would allow the communities to remain on the land. These local leaders dialogued about their proposal with Guatemalan authorities briefly at the beginning of 2017. But the dialogue was suspended after a few months, and the authorities have not been willing to restart it. The threat of eviction is the only prospect the Guatemalan government has given these communities and this threat will continue to be one of the root causes of forced migration.

What future can people find if the land they live on and depend on for their livelihood is not registered under their name and if they face the possibility of being forcibly evicted from the region? This reality must be considered when analyzing the root causes of forced migration if the government of the United States wants to stop or diminish migration into its territory. We hope that this article will be a helpful resource to inform the U.S. Vice President of the situation in the department of El Petén, where right now forced migration is the only solution local communities have for securing their future