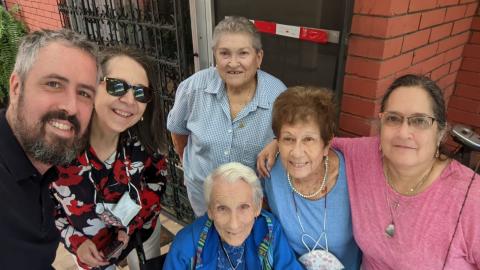 Growing crackdown on political dissent amid already significant corruption and human rights abuses raise concerns of authoritarianism. The following article was published in the September-October 2022 issue of NewsNotes.

Delegates heard repeatedly about the takeover of public institutions and a rise in corruption, human rights abuses, and authoritarianism by what many described as a “criminal alliance” of oligarchs, political elites, organized crime, and state security forces.

Much of the violence and corruption in Guatemala is fueled by international mining interests. Impoverished communities are often violently evicted from their homes to make way for mining. The government may take part directly – the delegation witnessed a large concentration of police gathering to carry out one mass eviction. But even where privately hired paramilitaries physically remove families, corrupt officials leave victims with little legal recourse.

The delegation met with Doña Adela, who had been attacked and run out of her home near a nickel mine in the town of El Estor. Doña Adela and her husband, Maya Q’ueqchi Indigenous spiritual guides, lead traditional rituals highlighting the people’s connection to nature and the need to protect the land for future generations. The mining company, owned by Swiss-Russian Solway Group, has been attempting to expropriate her family farm. Local leaders loyal to Solway accused the couple of witchcraft.

On May 16, hired hitmen entered Doña Adela’s home, held her captive for 24 hours, beat her, doused her in gasoline and threatened to burn her if she didn’t pay them $250,000, then burned down the house. The family is currently in hiding. She explained that they have tried to pursue legal charges with the Public Ministry but have received no response.

Business leaders and prosecutors frequently make spurious criminal accusations against targeted individuals. The delegation heard firsthand accounts of such “criminalization” throughout the country. Targets told of being smeared online by government-run misinformation “troll farms,” threatened with arrest and forced to go into hiding, or convicted and given harsh sentences for crimes they could not possibly have committed.

Human rights and land defenders are criminalized, as are journalists, independent prosecutors and judges. Many of Guatemala’s top jurists have fled to the United States. They are then replaced with lawyers and judges who will protect corrupt officials and pursue more spurious cases.

After peace accords were signed in 1996, ending 36 years of armed conflict in Guatemala, the country embarked on a process of transitional justice in which military personnel and even former heads of state had been successfully prosecuted. The UN-backed International Commission Against Impunity in Guatemala (CICIG), established in 2006, played a key role until 2019, when then-president Jimmy Morales announced that anti-corruption cases would be moved to the Public Ministry. Current President Alejandro Giammattei has continued to dismantle the transitional justice apparatus, naming Consuelo Porras to a second term as Attorney General in charge of the Public Ministry after she was placed on the U.S. Department of State’s “Engel List” of corrupt officials.

The delegation witnessed 69 individuals including 40 children living in hiding in a few cramped rooms. One man told the delegation how his entire community had been evicted from their homes and criminalized. He and his wife had a three-week-old daughter when they were forced to flee. She is now four months old and still “has no name,” as he and his wife fear being arrested on bogus charges if they bring her to the civil registry office. He said, “We are no longer living in the 1980s. We signed the peace accords. But it is not working. They are still trying to kill us.”

In a meeting with MOGC, Maryknoll Sisters and Affiliates in Guatemala confirmed the desperate situation the delegation had witnessed. Sr. Silvia Pacheco, MM quoted a recent column in the Guatemalan newspaper El Periodico that said, “The ‘ideology’ of the state is corruption.” In the final hours of the delegation’s visit, the offices of El Periodico were raided, and the paper’s managing editor José Rubén Zamora was arrested.
The delegation witnessed hope and inspiring acts of resistance by many Guatemalans, but the political situation in the country is increasingly desperate.

Faith in Action: Read the official report on the delegation https://www.ghrc-usa.org/ and a statement by the Maryknoll Affiliates at https://bit.ly/MKAGuatemala