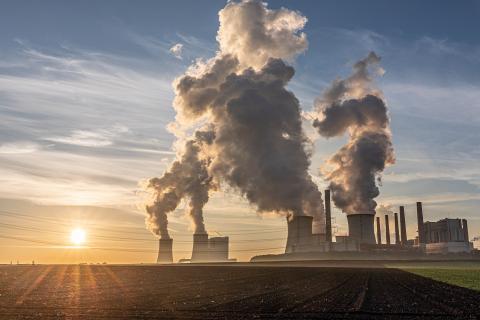 The Maryknoll Office for Global Concerns issued the following statement as a reaction to the UN climate talks in Glasgow, Scotland in November 2021. The following article was published in the January-February 2022 issue of NewsNotes.

On the heels of a dire UN report on the state of the climate, world leaders and their negotiators arrived in Scotland for what was the most consequential international climate talks since the meetings in Paris in 2015. Yet they failed to meet the moment. The following is a statement by Chloe Noel, faith economy ecology project coordinator of the Maryknoll Office for Global Concerns.

“Fossil fuel profits and addictions hampered the level of ambition necessary to meet the goal of 1.5 °C warming above pre-industrial level – for now. The longer we put off turning off the nozzle, the further away a healthy and habitable planet becomes for future generations of God’s creation. Dr. King spoke of “the fierce urgency of now,” the need for immediate, “vigorous and positive action” on civil rights. Climate change is our 'fierce urgency of now' and the Glasgow Climate Pact does not rise to the moment. Just as Dr. King said in 1963, there is such a thing as being too late.

“After another year of record heat, forest fires, hurricanes, floods and droughts, rich countries still are not willing to put forward the finance necessary to assist countries to adapt to climate impacts, nor to respond to irreparable loss and damage that communities are already experiencing today. Yet their very wealth stems from almost two centuries of fossil fuel usage. The United States came to COP26 with the intent to lead in the negotiations. But they continue to lead by blocking progress on loss and damage.”

Negotiators completed the Paris Rulebook and adopted the Glasgow Pact. One of the most challenging elements of the Rulebook is Article 6 of the Paris Agreement, which defines the rules on how countries can work together to reduce emissions. Noel commented: “While there were marked improvements, the system laid out in Article 6 still lacks the strength needed to move countries to more ambitious policies and contains loopholes for countries to evade fully accounting for their emissions. We welcome the inclusion of human rights language in the text, but the lack of ambition still stands as a threat to human rights and environmental integrity.

“The United States came to Glasgow with high-level officials and action plans. But more action is urgently needed. As a first step, Congress needs to pass the Build Back Better Act and approve the international climate finance budget lines to restore credibility and avert needless suffering in climate vulnerable communities at home and abroad. As the largest historical emitter and wealthiest country, we have a unique moral obligation to the Global South.”

In regard to COP27 in Egypt, Noel said: “COP26 was delayed by a year due to the COVID-19 pandemic. Both the climate and the COVID crises disproportionately impact communities marginalized by race, class, caste, gender and ability, especially in the Global South. As we look to the ‘African COP’ in November 2022, will the continent of Africa have widely accessible and equitably accessed COVID-19 vaccines, testing and treatment?

With just three percent of the continent vaccinated, it is a far cry from anything close to herd immunity or the goal set by COVAX to have 20 percent vaccinated by the end of 2021. It would be a shame to have an African COP when most people on the African continent cannot yet access a vaccine. The global community must now rally to provide the tools necessary – patent waivers, production capacity, and technology transfer – to end the pandemic.”

Faith in action: Contact your Senators to ask them to support the climate resolutions included in the Build Back Better legislation: https://bit.ly/32c9OR6

In May 2021, the Vatican officially launched the Laudato Si’ Action Platform inspired by the 2015 encyclical that accelerated the Church’s ecological conversion and work for environmental justice.

The Platform is a seven-year plan to galvanize action on climate within the global Church. According to Cardinal Peter Turkson, formerly of the Vatican Dicastery for Promoting Integral Human Development, the project is designed “to do something concrete” in response to the growing message from scientists and youth activists that “we are destroying our future.”

The platform invites all Catholics to prayerfully discern how they can best respond to the invitation of Laudato Si’ and make a seven-year action plan accordingly. The Vatican hopes the campaign will culminate in a year of celebration to mark the Church’s progress toward ecological conversion.

Faith in action: Explore the new Laudato Si’ Action Platform website, available in nine languages. Prayerfully discern with your faith community how you might get involved:
https://laudatosiactionplatform.org/