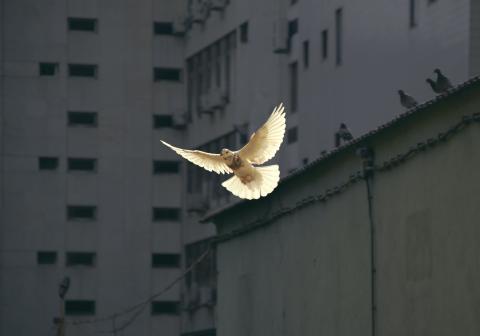 Archbishop John Wester of Santa Fe issued a pastoral letter calling his diocese and the larger Church to embrace nuclear disarmament. The following article was published in the March-April 2022 issue of NewsNotes.

In January, Archbishop John Wester of Santa Fe, New Mexico, issued a bold new pastoral letter, “Living in the Light of Christ’s Peace: A Conversation Toward Nuclear Disarmament.” As prelate of the archdiocese in which nuclear weapons were first developed and tested, and which continues to be a major center for the development and maintenance of nuclear weapons today, Wester calls on the church to embrace disarmament as part of a larger ethic of nonviolent Christian witness.

With a pastoral awareness that many in his flock depend upon the nuclear industry for employment, he suggests ways of transforming the economy, and invites his readers into a conversation about how to live up to the challenges and demands of Catholic teaching on nuclear weapons.

“It is the duty of the Archdiocese of Santa Fe, the birthplace of nuclear weapons, to support [the Treaty on the Prohibition of Nuclear Weapons] while working toward universal, verifiable nuclear disarmament, ”the archbishop wrote.

“I think we need to sustain a serious conversation in New Mexico and across the nation about nuclear disarmament. We can no longer deny or ignore the dangerous predicament we have created for ourselves. We need to start talking about it with one another, all of us, and figure out concrete steps toward abolishing nuclear weapons and ending the nuclear threat. If we care about humanity, if we care about our planet, if we care about the God of peace and human conscience, then we must start a public conversation on these urgent questions and find a new path toward nuclear disarmament."

“[Christ’s] light is the light of total nonviolence,” the archbishop concluded. “We must take concrete steps to begin the process of nuclear disarmament: to dismantle our weapons, to clean up our land, and to spend those enormous resources on structures of international nonviolent conflict resolution.”

Read the letter here: https://bit.ly/341UF6u The letter includes group discussion questions at the end of the document in the Appendix.