The coming years and decades will bring major changes in how energy is produced and consumed. The days of cheap, easy oil – and cheap, easy energy – are over, which is already causing significant societal changes. Even if we were able to collect the last bits of oil, we could not use them without creating a climate catastrophe.

A renewable energy revolution has begun

In the World Energy Outlook 2016 report, the International Energy Agency includes wind and solar as the “clear winners for the next 25 years.” Unfortunately, there are currently no known sources of energy that will be able to equal the massive energy output of conventional oil. We need to not only rapidly increase energy production from renewable resources but also significantly reduce overall energy use.

Will the revolution fix historical inequities?

In 2010, the International Energy Agency showed that 20 million people in New York consumed more energy than 800 million people in sub-Saharan Africa, excluding South Africa. Even in the Global North, private energy providers have ignored lower-income communities where profits are slim. As we transition from fossil fuels to clean energy, we need to address the historical inequities in energy access and consumption.

A 2016 report by ActionAid USA, Friends of the Earth Scotland, and WEDO entitled “Power for the People,” describes how the same kinds of large multinational corporations that dominate the energy industry today could retain their power and control. They could replace their large-scale centralized fossil fuel power stations with large-scale centralized solar plants, wind farms, and other renewable energy producers.

“The same economic structures and incentives that exist today,” the report says, “that lead to these companies failing to deliver energy to large segments of the world’s poorest and most marginalized, or attempt to price gouge vulnerable communities that are grid connected, would persist.”

In his encyclical, Laudato Si’, Pope Francis reiterates the long-held Catholic principle of subsidiarity, that communities and associations that provide a rich social life (such as the family, unions, nonprofit organizations, and religious congregations) need to play a significant part in creating their own solutions because their human dignity is best protected this way and they are the vehicle by which society functions most effectively.

“Attempts to resolve all problems through uniform regulations or technical interventions can lead to overlooking the complexities of local problems which demand the active participation of all members of the community… Merely technical solutions run the risk of addressing symptoms and not the more serious underlying problems. There is a need to respect the rights of peoples and cultures…” [Laudato Si’ 144]

“It is essential to show particular concern for indigenous communities and their cultural traditions,” Pope Francis writes.  “They are not merely one minority among others, but should be the principal dialogue partners, especially when large projects affecting their lands are proposed.” [Laudato Si’ 146] 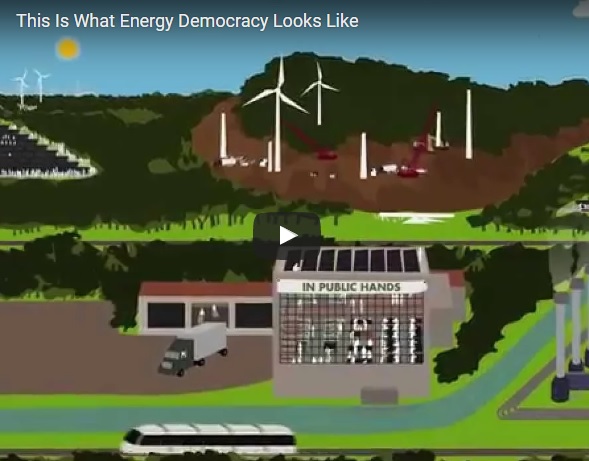 Watch this five minute video “This is what energy democracy looks like” produced by Trade Unions for Energy Democracy, and available in English, Spanish, Portuguese, and Arabic.

Now is the moment for energy democracy

The change from fossil fuels to renewable sources of energy is an opportunity to include energy users in decision-making, to expand their choices, and to allow them to reap the economic benefits. In particular, communities around the world are working to include historically marginalized groups in their transition to renewable energy. Many are creating decentralized, community-controlled renewable energy production, a structure known as energy democracy and energy sovereignty.

In Scotland, Community Power Scotland has revolutionized the energy sector on a national scale through community-run energy projects. The projects are an essential component of the Scottish government’s plan to generate 100 percent of the country’s electricity from renewable sources by 2020. Community Power Scotland works with a wide variety of communities with different interests and motivations. From small hydro projects, to wind farms, to solar initiatives, they use a variety of technologies to organize communities to guarantee renewable energy sources for future generations.

“Energy democracy means that community residents are innovators, planners, and decision-makers on how to use and create energy that is local and renewable.”

In the United States, the Center for Social Inclusion supports community-led energy projects across the country. Their “Energy Democracy for All” interactive map pinpoints communities in the U.S. that are innovating “how to build their local economies while taking into their own hands the fight against climate change by developing community-scale renewable energy projects.” 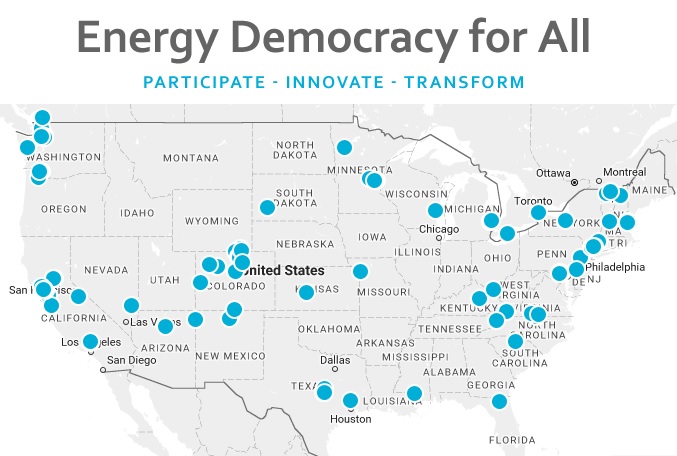 Find a community-run renewable energy project near you by exploring this interactive map from the Center for Social Inclusion.

In Oakland, California, communities of color organized the Oakland Climate Action Coalition to help the city meet its goal to reduce greenhouse emissions by 36 percent below 2005 levels by 2020 and by 85 percent by 2050. More than a third of the coalition’s proposals were adopted by the city. A number of organizations working in marginalized communities in Oakland – from homeless shelters to local grocery stores – have installed solar panels resulting in dramatic reductions in energy bills, thus freeing funds for core activities.

Globally, crowdfunding has played an important role in financing many community energy initiatives. Organizations such as RE-Volv, Citizenenergy, Ethex match people interested in investing in community solar projects with projects needing financing. Investment opportunities are more available in Europe than in the U.S., but they are growing rapidly. 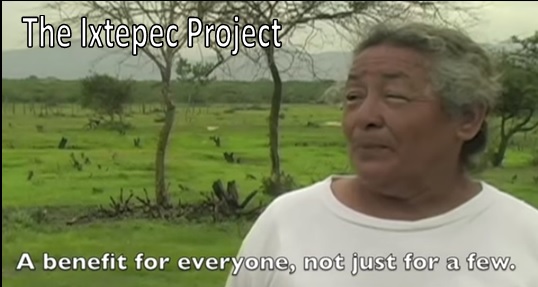 Watch this two minute video of residents of Ixtepec talking about why they want to build a community wind farm, produced by The Yansa Group, an NGO partnering with the community to develop the project.

The Ixtepec community is made up of mostly Zapotec indigenous peoples who say that land for wind farms is often bought by companies through illegal means, their community is not consulted as the law requires, and the energy produced is sent to cities with no benefit to them. Ironically, land that was “given” to indigenous communities by the government – desolate and windy land that had little value at the time – is now valued by private corporations for wind energy production.

In 2009, local groups in Ixtepec began to organize not against another private wind farm, but to build their own community-owned wind farm. In 2012, after a long consultation and planning process, they presented offers to the government. Unfortunately, they have encountered legal difficulties created by a government that favors corporations. Yet they continue to struggle toward their vision of a community-run wind farm.

Energy democracy is the future

Community-controlled renewable energy projects demonstrate that the world can transition from fossil fuels to renewable energy and can change the structure of production and ownership to be more equitable, just, and sustainable.

Take action for your community: Download and use “A Deck of Strategies,” a set of cards that present strategies for communities to build capacity for energy democracy, created by the Democracy Collaborative.