As we transition from a planet that we falsely thought was endowed with endless resources to one with limits that we are running up against, it is clear that not only must a paradigm shift occur as described in the previous edition of Encounters, but also public policies need to change.  To transform our economy to fit within the limits of Earth’s biosphere and to distribute resources more equitably, Pope Francis describes some guiding principles as well as specific recommendations to inform policy changes. These suggestions affirm many of the principles and policy changes recommended in the Faith, Economy, Ecology, Transformation group’s (FEET) founding statement. The second pillar of the FEET's founding statement calls for public policies that support an economy of right relationship.

"Frequently . . . people’s quality of life actually diminishes – by the deterioration of the environment, the low quality of food or the depletion of resources – in the midst of economic growth."(194)

One of the most important changes needed is to redefine what we consider to be progress. For too long, policies have been based on the mythology that economic growth will solve all problems. But that is not the case, and many economists and social scientists are beginning to look beyond the gross domestic product (GDP).  This is because GDP is a flawed measure of well-being, counting spending on socially negative things such as pollution, crime, and traffic accidents, as positive for the economy, and counting the consumption of non-renewable resources as income instead of an expense. GDP also fails to account for important parts of the economy, such as work done in the home and volunteer hours. An  illogical aspect of GDP is its   failure to define limited goods (including dwindling natural resources like water, oil, minerals, fish) as scarce, placing low or no value on these things, while treating abundant goods, such as knowledge, as scarce due to patent and copyright systems. A variety of alternative measures have been created such as the Index of Sustainable Economic Welfare, the Genuine Progress Indicator, National Well-Being Accounts, the Happy Planet Index, and Gross National Happiness. 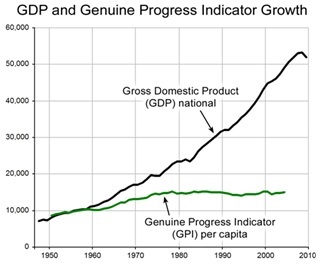 This graph, based on data collected by Redefining Progress, shows how GDP has grown steadily since 1950, but the Genuine Progress Indicator - which considers income distribution, changes in leisure time, housework, volunteering, and effects from higher education - has not increased since the mid-1970s. While GDP increases with spending on crime, resource depletion, pollution, and other socially negative spending, the GPI treats these types of spending as costs.

Finding the right alternative is not easy. There are many factors to be considered. Ben Beachy and Justin Zorn describe these factors in a working paper for the Welfare Wealth Work for Europe project, including the influence of political orientation on the diverse reasoning for changing GDP. Beachy and Zorn recommend four new indicators to supplement the GDP, each measuring aspects considered important by different interests.

Jeoen van den Bergh and Miklos Antal, professors at the Autonomous University of Barcelona, evaluated alternatives to the GDP and found shortcomings in all of them. They suggest that governments place less importance on GDP growth until better alternatives are developed.

Treat social and ecological problems together

"We have to realize that a true ecological approach always becomes a social approach; it must integrate questions of justice in debates on the environment, so as to hear both 'the cry of the eath and the cry of the poor.'" (49)

"In many parts of the planet, the elderly lament that once beautiful landscapes are now covered with trash. Industrial waste and chemical products utilized in cities and agricultural areas can lead to bioaccumulation in the organisms of the local population, even when levels of toxins in those places are low." (21)

In Laudato Si’, Pope Francis repeatedly names a “throwaway culture” as a root cause of the ecological crisis. “Doomsday predictions can no longer be met with irony or disdain. We may well be leaving to coming generations debris, desolation and filth. The pace of consumption, waste and environmental change has so stretched the planet’s capacity that our contemporary lifestyle, unsustainable as it is, can only precipitate catastrophes, such as those which even now periodically occur in different areas of the world. The effects of the present imbalance can only be reduced by our decisive action, here and now.” (161) An important solution to reducing physical waste is moving toward a circular economy, as seen in the natural world. “The way natural ecosystems work is exemplary: plants synthesize nutrients which feed herbivores; these in turn become food for carnivores, which produce significant quantities of organic waste which give rise to new generations of plants,” Francis says. “But our industrial system, at the end of its cycle of production and consumption, has not developed the capacity to absorb and reuse waste and by-products. We have not yet managed to adopt a circular model of production capable of preserving resources for present and future generations, while limiting as much as possible the use of nonrenewable resources, moderating their consumption, maximizing their efficient use, reusing and recycling them. A serious consideration of this issue would be one way of counteracting the throwaway culture which affects the entire planet, but it must be said that only limited progress has been made in this regard.” (22) Indeed, progress has been limited and changes are happening slowly, but there are examples of movement toward a circular economy. The Ellen MacArthur Foundation was established in 2010 to speed the transition to a circular economy, which is illustrated below. The foundation offers examples of businesses that have adopted circular production methods such as Splosh, which packages its household products in dissolvable packets instead of plastic bottles, essentially eliminating packaging waste; and Desso, a flooring manufacturer that redesigned its carpets so  they can be dissembled, reprocessed, and reused in other carpets.

The Ellen MacArthur Foundation offers a diagram of a circular economy at: http://www.ellenmacarthurfoundation.org/circular-economy/interactive-diagram

While most of the movement toward a circular economy will come from business leaders, governments can help speed up the process. A study by the World Bank published in 2006 entitled “Circular Economy Legislation – the international experience” continues to offer relevant examples of the types of laws and initiatives governments have implemented to help spur the circular economy. In 2012, Chatham House, a British think tank, published an analysis of the circular economy which details helpful policies governments can adopt, such as end-of-life regulations that are already being applied in the EU and some Asian countries.  Also, governments can stimulate businesses that use circular production methods through public procurement. Denmark has been especially effective in using this method. China has also been on the forefront of the global movement toward a circular economy.

"The strategy of buying and selling ‘carbon credits’ can lead to a new form of speculation which would not help reduce the emission of polluting gases worldwide." (171)

While most of the policy suggestions made by Pope Francis in Laudato Si’ point toward principles or broader concepts, he expounds on one specific policy proposal: carbon markets. "This system seems to provide a quick and easy solution under the guise of a certain commitment to the environment, but in no way does it allow for the radical change which present circumstances require. Rather, it may simply become a ploy which permits maintaining the excessive consumption of some countries and sectors." (171) The concept of carbon credits is enticing: A company or country, usually in the Global North, can offset (or compensate for) the carbon emissions that they emit by avoiding the release of an equal amount of emissions at another location, usually in the Global South, or by sequestering the same amount of carbon. Yet when the concept is placed into practice, a host of problems become evident. First, carbon offsetting shifts the responsibility for reducing carbon emissions from the major polluting industries and countries to indigenous communities that are already using their land in a sustainable manner and contribute minimally to the buildup of greenhouse gases. By buying these offsets, polluting businesses lose their incentive to make changes in their own operations.  Second, many carbon-related projects have negative effects on local communities. GRAIN and the World Forest Movement produced a report about indigenous and peasant communities negatively affected by carbon offset projects that are part of the United Nations’ Reducing Emissions from Deforestation and Forest Degradation (REDD+) program. “Most REDD+ activities place limits, quite often severe limits, on the use of forests by local communities for shifting cultivation, for gathering and for other subsistence activities,” the report says. “Restrictions on hunting, fishing, grazing or cutting some trees for the construction of homes or canoes are also regularly established and enforced by REDD+ project owners, often with the support of armed guards. At the same time, large-scale drivers of deforestation, like industrial logging, infrastructure mega-projects, mining, large hydro-dams, and, above all, industrial plantations for trees, oil palm or soybeans, continue without restriction.” Third, the science behind many of the numbers involved in carbon trading is questionable at best. A report by Carbon Trade Watch points out, “Carbon stored in forests (largely in soils) is part of a natural cycle between the atmosphere, the oceans and the biosphere whose dynamics are difficult to predict and quantify and differ from location to location. In addition, there is the question of ‘permanence’: it is impossible to predict how long the trees will remain living (i.e. storing carbon) in one place.” For example, the British band Coldplay tried to offset the carbon emissions from producing their musical album by hiring a company to plant 10,000 mango trees in southern India. An investigation four years later showed that only a few hundred of the trees remained after thousands had died due to lack of care. The Government Accountability Office concluded that “the overall effect of the CDM [Clean Development Mechanism – the carbon offset program organized through the Kyoto climate negotiations] on international emissions is uncertain, largely because it is nearly impossible to determine the level of emissions that would have occurred in the absence of each project… it is impossible to know with certainty whether any given project is additional.” Fourth, carbon trading and offset schemes are open to corruption at nearly every step in the process, as a variety of articles have shown. Larry Lohmann, researcher and director of the Corner House, an NGO in the U.K., describes the carbon offset market as “an unregulatable market” and that “attempts to regulate it will only entrench its status as a locus of international corruption and exploitation.”  Finally, perhaps the most important argument against carbon offsets (and carbon trading in general) is that they are distractions from better methods to reduce greenhouse gas emissions. While massive amounts of money flow through the carbon markets, little of it actually goes toward reducing carbon emissions. According to a World Bank study, in 2009, only two percent of the $144 billion global carbon market was used for project-based transactions. The remaining 98 percent went in to paying consultants, traders and international development organizations as satirized in the comic below. 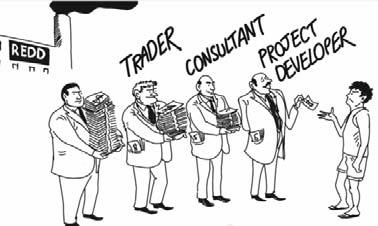 Illustration from a video by FERN (2012): The Story of REDD: A real solution to deforestation?

Even that two percent is poorly spent, according to Carbon Trade Watch. “As of September 2009, three-quarters of the offset credits issued were manufactured by large firms making minor technical adjustments at a few industrial installations to eliminate HFCs ([hydroflourocarbons] refrigerant gases) and N2O ([nitrous oxide] a by-product of synthetic fiber production). It is estimated that a straightforward subsidy to regulate HFC emissions would have cost less than 100 million Euros.”

For these reasons Pope Francis says that carbon credits are not an effective way to reduce greenhouse gas emissions.

In the next Encounters

We will look at Laudato Si’ through the lens of the third pillar of the FEET founding statement: addressing corporate power and influence.